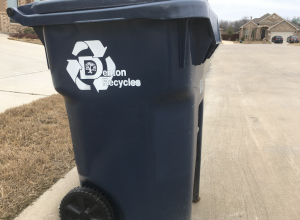 The city of Denton will soon begin a new process to avoid recycling incorrect items.

Starting March 1, city workers will tag blue recycling carts that contain items that are not recyclable and will not empty the carts until the following week, after those items have been removed, according to a city news release.