The Argyle Planning & Zoning Commission this week approved two preliminary plats for two unrelated subdivisions in the town’s Extra Territorial Jurisdictions, which are territories outside a municipality’s boundaries that it is still able to legally exercise authority.

The first item was the proposed amended preliminary plat for Argyle Crossing, a proposed 29.8-acre subdivision southeast of Hwy 377 and Frenchtown Road. The proposed development for this property has changed several times since 2016.

In October 2016, the property was called Liberty Pointe, a proposed 23-lot subdivision, and Town Council approved the preliminary plat. In March 2017, P&Z approved the final plat, but it was never filed at the Denton County Clerk’s office, according to the town of Argyle.

In September 2018, the developer proposed a new preliminary plat for the property, calling it Argyle Crossing, with 48 residential lots. P&Z approved it, but the next month, the developer withdrew it and its proposed final plat at the request of the P&Z commission. 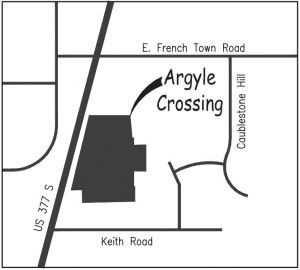 The second item was a proposed preliminary plat for Harvest Townhomes Phases One and Two with 209 attached single-family residential lots and 18 open space lots on 27.78 acres in the Harvest subdivision, located north of FM 407 and west of I-35W, just outside Argyle’s town limits but within its ETJ.

Both of these proposed preliminary plats meet all minimum standards of the Town Development Standards, according to the town of Argyle, and they were both approved by P&Z during its meeting Tuesday night. No Town Council action is needed because there are no variances being requested and P&Z has the authority to approve preliminary plats. Both applicants will later have to submit a final plat application to proceed with development.