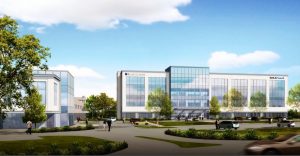 Flower Mound’s Planning and Zoning Commissioners and town staff had an unexpected learning experience about municipal preparedness on Monday night.

The agenda item under discussion was the request by Lakeside Center developer Realty Capital to rezone 10-acres– plus a portion of Planned Development (PD-31)– from Agricultural to (PD-169), which allows greater flexibility in standards.

The anchor for the vision of the Lakeside Center mixed-use project, is the town’s proposed first four-story, 120,000-square-foot Class A Office building. Another two-story, 18,000-square-foot office building, a southern 456-space parking garage, plus a central open-space expected to be 47-percent of the project, as well as eight homes on the western border are included.

The modifications and exceptions to the Code of Ordinances, as well as the architectural standards, under the existing Urban Design Plan, were almost as lengthy as Santa’s list of names.

They also highlighted the need for separate Class A Office definitions, standards, requirements and related issues not covered under the existing Urban Design Plan.

Locally known as the Roach property, named after the longtime owners, it’s located west of FM 2499, east of Northwood Drive and adjacent to the Lakeside Crossing Development– already under construction– to the north. Developers posit the proposed Class A Office employees would increase business in the restaurants and retail at Lakeside DFW via a trail-link through Lakeside Crossing.

When P&Z approved that previous mixed-use project in May 2017, it was with 11 exemptions and waivers attached. It also addressed the 10-acre Roach parcel to be added eventually, with the same architectural theme and color pallet already approved for Lakeside Crossing.

That number of “outside-the-box” requests involving office buildings, should’ve been a red flag then that the town’s Urban Design Plan needs updating.

The town’s vague guidelines for a Class A office development are: high-quality office buildings focused along FM 2499; limited large parking areas/fields along FM 2499; and, designs that incorporate a walkable area with open-spaces, gathering spots, plus linkage to environmental amenities.

P&Z Vice Chairman Laile Neal said: “A Class A Office Building is a new product that the town hasn’t dealt with before and [it] has no existing standards.”

He also pointed out that the term “classic design” refers to a section of the project’s 380 Agreement with the town, not used as an architectural term.

For more than a decade, town leaders and elected officials have been on a quest to attract big business and corporations to office in Flower Mound. In the past couple of years, multiple professional real estate brokers, commercial rental consultants and Class A office developers have tutored officials on how to attract the target clientele.

Class A Office real estate professionals follow the Field of Dreams’ “build it and they will come” philosophy– also known as “the egg will produce chickens” approach. If high-quality job opportunities are available, people will flock to fill them.

If you want to compete in the major leagues, you can’t offer them a little-league field. In Flower Mound’s case, it only has an empty field. It needs an existing building so the players don’t need to wait for the club house to be built; that takes a large amount of up-front financing.

As a result, the focus has been on specific pieces of the Class A Office puzzle, such as The Point development’s focus on the “chickens before the egg” approach of creating residences in an urban-style setting to attract the future office “worker bees.” The question, however, is that, without the office “hive” in which to work, why would the bees settle someplace, only to commute to their existing “hive?”  So, no honey (tax revenue) for the town.

“We’re on the cusp of creating something new and unique,” said Chairman Perfecto Solis. “This is a unique project that needs unique exceptions.”

Under Realty Capital’s incentive agreement with the town, their building must meet or exceed the existing Urban Design standards, or qualify as a Meritorious Design. As such, the developers were required to request a list of design-standard modifications and/or exceptions.

“To do this we need a building that tenants will want to go to,” said Alex Brown of Reality Capital Management.

The building exterior would continue the established overall Lakeside DFW contemporary look– glass and metal accents, façade materials allowing for more than 50-percent glass doors and windows, as well as secondary-material metal panels. In addition, the request included a comprehensive sign package with more and larger signs than within the town’s sign code.

As a member of the family who’s owned the property since 1925– and still retains some acreage– Jody Roach said: “There’s no existing language to describe these buildings, so the modifications and exemptions are for what doesn’t yet exist.”

Remaining unresolved is a defined Class A Office designation.

It joins the town’s need to formalize future land compensation and park fee assessment calculations, for developments with residential usage– as an alternative to the Single Family zoning requirements– as revealed during proceedings for The Point.