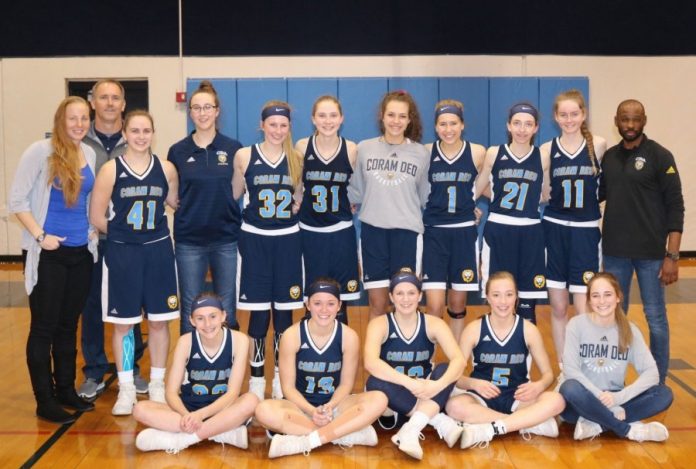 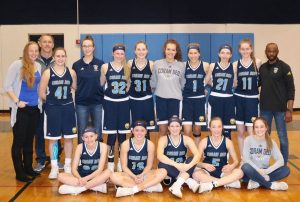 For the Coram Deo Academy girls basketball team in Flower Mound, the 2017-18 season has been a year of firsts.

The Lady Lions won their first ever district championship and earned their first trip to the playoffs, as well as having two 1,000-point scorers (Piper Brandenburger and Ashley Faux) in their starting lineup for the first time in school history.

Coach Harrison Eaddy said it has definitely been a year to remember for the girls team, especially with their capturing the TAPPS 4A-District 3 title.

“Winning a district championship has been an amazing accomplishment,” Eaddy said. “For our girls basketball program, we have faced many challenging years. My first year coaching at Coram Deo, we had a 3-24 record. My second year was a 20-10 record.

“The group of student-athletes that we have this year have been ready to turn around our basketball culture since last year. The championship just gave us all confirmation that hard work pays off. We will be able to hang a banner in our new gym next year.”

The Lady Lions finished the regular season with a record of 26-7, including an 8-1 mark in district competition, and had five, first team all-district players including Bradenburger, Faux, Kacey Heitschmidt, Emma Dwyer, and Alexis Ashford.

“This team is special because everyone understands and embraces their roles when it comes to us competing,” Eaddy said. “We don’t play the blame game, have attitudes, or hidden agendas. I think in today’s sports at any level that’s rare. All of us want to see each other succeed.”

Coram Deo opens the playoffs with Dallas Shelton at 7:30 p.m. on Tuesday and Eaddy said regardless of the outcome, he hopes his players have learned what it takes to be successful this season.

“We hope the players take away mental strength in all things,” Eaddy said. “As coaches, we are just one of many influences during the journey of our student-athletes. If we can help them understand that strength and faith in both adversity and glory are important to success, then we will have contributed to their becoming productive members of society in the image of Christ. We never get too high or too low because we are anchored in Him.”