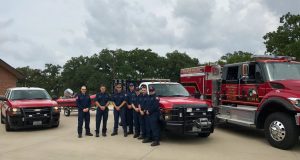 The Flower Mound Fire Department has sent a second team of seven firefighter/paramedics to help in the areas hit hardest by Hurricane Harvey.

The crew traveled to the Houston area Sunday afternoon and took Fire Engine #2 along with their rigid inflatable boat.

Some parts of Texas could receive up to 50 inches of rain in the coming days, an amount that would exceed state records.

“This event is unprecedented,” the National Weather Service said in a message posted to Twitter. It’s “beyond anything experienced.”

“We are here to serve and are looking forward to making a difference in these hard-hit areas,” said Brandon Barth, spokesman for the Flower Mound Fire Department.