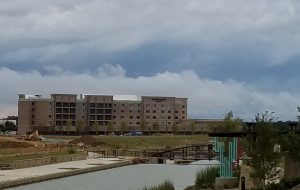 “This hotel project has taken longer than expected,” said Daryn Eudaly, CEO of New Era Hotels and Resorts, in an interview about The Courtyard Marriott at The River Walk in Flower Mound.

His understatement was referring to the delayed construction of the parking garage required to be completed as part of the hotel’s developer’s agreement (DA) and the incentives agreement between the town and the developer before the hotel can receive its certificate of occupancy (CO).

“It’s our fault that we’re behind on the parking garage,” said Eudaly. “The hotel is on track to finish on time and we’re pushing it [the garage] forward. The town, the staff, the mayor, the council … they’ve all been wonderful and have worked with us.”

Perhaps the most concerning obstacle related to the delay of starting the garage involved the $9 million dollar funding issue. The town’s contribution of $1 million– to guarantee free-parking for users– was secured, but the remaining funds were not consistently in place. Eudaly, also founder and president of SPC Capital, in a recent television interview, said he took responsibility for any funding issues. In other words, “the buck stops here,” literally.

Two different permits had not been satisfied for construction to begin on the three-story garage to meet the original hotel’s October completion date. The Development Permit was granted on Aug. 2, which allowed for the garage groundbreaking the following week.

The Commercial Building permit was also under town review, until it was returned to the developer with some minor revisions. Upon final approval of that permit, vertical construction can begin.

“Once that is issued, they can go vertical,” said Assistant Town Manager Tommy Dalton. “They are close and have a few comments to address. However, they have to get the site work done and the foundation before you’ll actually see the structure going up. The foundation work is considerable, so it will take time.”

Eudaly said the foundation work is the developer’s complete focus.

“A precast garage means we’re able to build our beams off-site and then bring them in, so weather doesn’t have any affect,” he said. “We have a firm finish date of Dec. 28, so– now that we’ve broken ground and all the work going on– all we have to do is bring in those upper floors and they go up like Tinker Toys or Legos. It’s really fun to see.”

Construction on Flower Mound’s first hotel is more than 90-percent completed and has been planned to open for holiday season occupancy.  The developer is hoping a compromise agreement will allow them to schedule reservations.

In their reservation system, they already have wedding or corporate events scheduled in the conference center and have the ability to book for the general public from Nov. 15 forward.

“We have the actual management staff with Ambridge, they have about 700 clients, to teach the new hotel staff the [Marriott] specific brand,” said Eudaly. “They bring in their top trainers and we already have general sales, housekeeping and maintenance engineering department heads hired for this hotel; and, our chef, because this hotel has a full catering ability.”

He added that they’re still searching for an engineer, desk clerks and housekeeping, serving, bartenders and more staff. He said hospitality job sites have listings, or people can apply directly with Marriott by visiting: www.careers.marriott.com/career-paths/hotel/

“Everyone is very excited and optimistic about them [New Era] setting a completion date of Dec. 28,” said Town Manager Jimmy Stathatos. “The biggest concern has been making sure the garage gets built and [without completed permits] we don’t have a ‘hammer’ to make sure the project is completed.”

Any compromise agreement will be determined by the Town Council.

“They can consider one [opening date] at any point they feel the best-interests of the town are protected,” said Dalton.

Eudaly said everyone at New Era Hotels and Resorts is already planning for the Flower Mound hotel opening event.

“We are really going to celebrate the opening of this hotel,” said Eudaly. “It’s going to be a full-out party.”