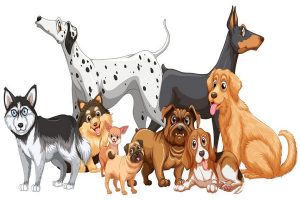 Last month I bragged about all the birds in my life and the pleasure I derive from my encounters with them.  (I did leave out having bats in my belfry but then bats aren’t really birds!)

Being the ultimate animal lover, this month my focus is on dogs we have befriended or rather dogs that have befriended us.  I’ve told you before that we used to have a golden retriever daughter of our very own and so that breed is closest to my heart.  I’ve also, in the past, informed you of some of the buddies we’ve made when my husband and I go on our walks.  But in addition to our old petting pals some new friends have crossed our path.

One I’ve known for a couple of years now, Maggie, lives right up the street.  When my husband and I take our daily walk, I always shout out, “Maggie.  Maggie Mae…will you come out and play?”  If she’s out in her yard she starts barking for me as soon as I’m within her hearing range.  She runs up to the fence and squeals, oofs and whimpers until I stick my hand through the fence.  She’s my most favorite canine acquaintance.  Every moment I’m petting her on the head is precious to me.  I just recently learned that there is a golden Labrador who just moved in before you get to Maggie’s place.  Her name is Ellie and she, too, is a sweetheart.  The other day, while petting Ellie, Maggie’s mom and dad drove down the street.  They busted me loving on Ellie and said they were going to tell Maggie that I was being unfaithful.  They are such snitches!

Ever since we’ve been taking these strolls (like for at least a couple of years) there has been this bloodhound behind a very tall privacy fence.  She howls on cue (that’s as soon as she hears us) and all it takes is for me to call out, “Hi Baby,” and there is total silence.  Recently, her humans were outside and I stopped for a chat.  Baby’s name is actually Ruby and couldn’t be any friendlier.  I was given the go ahead to pet her any time I’m passing by which was just what I wanted to hear.  You can bet it’s a sure thing that her hound dog howl alerts her neighbors.  That would be the two solid black, standard size poodles next door.  They yap and fuss raucously while frantically running back and forth alongside their fence.  They’re very intimidating, well, at least they were until we met up with them while on a walk with their human.  He clued us in on their ferocity which turned out to be a total hoax.  Their display of aggression is just that…a display.  They go by Rueger and Pritsy and all we have to do now is say their names and their front paws are atop the fence, tails wagging, ready for some nose nudging.

Down several blocks and around several corners is what I call the trifecta.  Here you have, not one, not two, but three golden retrievers all behind the same fence and all anxious for head pats. In return they’re tickled to gnaw on our wrists.  There’s the old girl, Stella, her son, Bodie and the youngster, Cooper who comes from a long line of champions.  There’s really nothing like rounding the corner and seeing these three gorgeous animals poking their noses through the wire fence…waiting impatiently for some caresses.

Ken will under no circumstances pass up an opportunity to pet a horse’s nose.  I don’t get the allure because the teeth are pretty scary but to each his own.  There happens to be two very attractive horses on our route and it almost seems like they wait for Ken right at the fence.  I never say neigh to stopping by.  There’s a pug named Oakley and a Dane named Baxter that we’ve met while talking with the horses.  They are a far cry from goldens but quite friendly.  I prefer to limit any petting on their end to when the owners are around.  (In case you’ve never noticed, Great Danes are really, really big dogs.)

We used to swing by Lola’s place…a true people pet golden Lab.  But we changed our route so we don’t see much of her anymore.  We did learn she has a new pal who keeps her pretty busy so she probably hardly misses us.

At the bottom of a steep hill is an area my hubby refers to as The Pound.  We’ve nicknamed the inhabitants because we don’t know their actual names.  There’s Legs (probably has some greyhound, maybe a dash of Weimaraner and something else with extremely long limbs.  Airhead is so named because he still has a puppy brain, is solid black and he, like Legs, is all bark and no bite (we think).

The little grey poodle is as sweet as he can be and always up for a friendly hand to pet him.  And we always have a friendly hand.  There’s a very elderly golden that hangs out in the yard who woofs on occasion, has some obvious problems with arthritis and I don’t think the eyesight is what it used to be.  We just let her be but always comment on the weary face full of grey fur.  To round out the menagerie is the barker/charger from hell.  Things would be so much better without him.  This one, well, this one, I think his bite might be worse than his bark.  We don’t test those waters.

Next door to The Pound is a newbie.  I believe it’s a she whose name I can’t recall.  But she is almost pure white and the breed is golden doodle, not to be confused with a Labradoodle.  This baby is really unique.  We’ve only seen her out a couple of times because her owners don’t want her getting dirty!  I don’t blame them but it kills me not to be able to pet her more often.

Once past The Pound, it’s only a couple of blocks before we get to Blanche’s house.  Blanche is a stunning very light colored golden retriever.  Unfortunately, I’m pretty convinced she’s bipolar.  I say this because I’m pretty convinced she is!  Half of the time we go to the fence to shower her with attention and love, she backs away, gets on the other side of the iris plants by the foundation of the house and practically makes herself one with the bricks.  Other times, she sees us coming from afar and starts to bark and coo all at once.  She turns round and round in circles to show her delight that we’re coming to see her.  Then she mashes her whole body against the fence so she’s sure to get her entire torso stroked.

Next stop…our house.  Our walk to see friends has come to an end.  But, we’ll get to see most everyone again tomorrow.  Meanwhile, we still have our two cats at home and you know how friendly cats can be!

BTW, if you’re thinking that I go off the rails with not knowing when and when not to capitalize the names of the breeds ~ I googled them and this is what I found.

P.S. – Just wanted to add that while we know the names of all the dogs, save one, we can scarcely remember the monikers of any of their owners.  We bad.