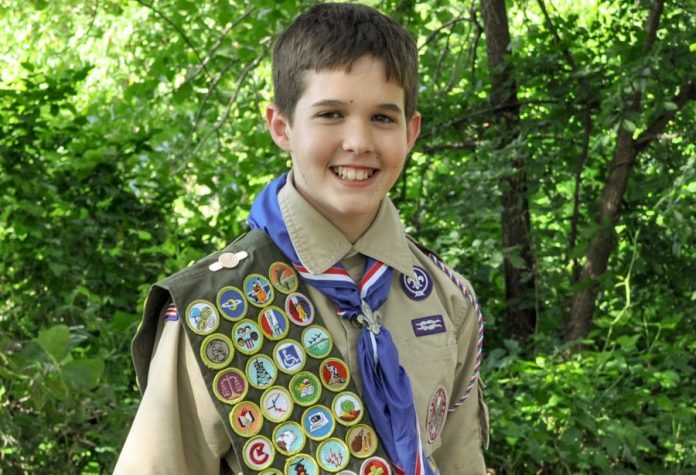 Most 13-year-old boys are just getting started with setting goals, not finishing up major life-changing ones. Such was the case for Quinn Twitchell, a Flower Mound 8th grader, who earned all available merit badges with the Boy Scouts of America.

The achievement is so rare, according to the Merit Badge Knot website, only 332 Boy Scouts have accomplished this since records were first kept in the 1940s.

“I didn’t realize at the time what a big goal it was,” said Twitchell, a member of Troop 292, which is sponsored by the Church of Jesus Christ of Latter-day Saints.

“A member of our Lewisville stake presidency in our church asked me what was my goal for Boy Scouts and I just decided then that I wanted to try and earn them all. My parents supported me, but thought I would grow tired of it at some point.”

He never tired of it. In fact, the Eagle Scout rank takes many boys until they are 18 to earn. Completing all of the merit badges at such a young age meant Twitchell averaged a merit badge a week for two and a half years. That’s quite a workload for someone who also participates in running, band, and the robotics team at McKamy Middle School.

Service is also important to both the Boy Scouts and Twitchell. For his Eagle Project, Twitchell organized and made 400 port pillows for cancer patients going through chemotherapy who find discomfort while wearing seat belts.

“I personally know several people who were having chemotherapy and the implanted port against the seatbelt was uncomfortable. Many could not wear a seatbelt while driving in a car,” said Twitchell. “It was a way I could help and serve others around me who are going through a hard time.”

Twitchell earned additional awards that require one to go above and beyond the requirements of Boy Scouts.

As a Cub Scout he earned the Arrow of Light, Duty to God, the Thomas S. Monson award, and the Dr. Charles H. Townes Supernova Award. In Boy Scouts, Twitchell earned the Den Chief cords, and the Hiking, Riding, and Camping NOA awards, which means 50 nights of camping, 150 miles of hiking, and 300 miles of bike riding.

“Boy Scouts has taught me leadership roles and the many things I can do for people,” said Twitchell.

Twitchell celebrated his achievements at his Eagle Scout Court of Honor at the National Scouting Museum in Irving on his 14th birthday.