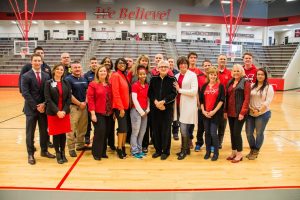 Doctors at Medical City Lewisville say it was the calm and quick action of the staff and students that saved the life of Ira Sherrill, an English teacher at Marcus High School.

Sherrill collapsed just after the third period bell had rung on January 4, the first day back to school after the winter break. Students and staff, including the principal and school nurse, sprang into action, performing CPR and using the school’s Automatic External Defibrillator, or AED, to restore a normal heart rhythm until paramedics arrived.

Sherrill was transported to Medical City Lewisville, where it was determined that his left main artery (commonly referred to as “the widowmaker”) was fully blocked. He underwent successful emergency double bypass open heart surgery and is recovering at home.

Medical City Lewisville interventional cardiologist Dr. Babu Makkena said that without the quick response on the Marcus High School campus, Ira Sherrill may not have made it to the hospital for lifesaving surgery.

“There is generally a very low survival rate for patients with this type of blockage,” says Dr. Makkena.

0 0 0 0 0
Previous : Foodie Friday: Flashback To Sushi Go in Flower Mound
Next : Kendall: What You Don’t Know About Reverse Mortgages