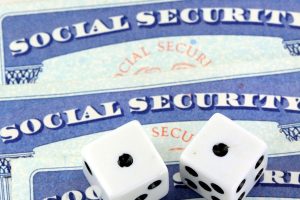 My husband had been looking forward to collecting his Social Security for the past 20 years!  I think this was a bit premature but who among us doesn’t have his or her quirks?  He has had a plan designed around turning 70 and that date is fast approaching.  The amount of homework he has done to get answers to his many questions is phenomenal to say the least.  All he wants is to make certain there are no glitches…so when the first check comes due, it in fact, arrives on time.  As most anyone can attest to, dealing with the government can be a tad tricky.

This tricky business has become so overwhelming that nothing can better describe it than a well orchestrated, finely tuned, bureaucratic loop.  This is evidenced by our experiences over the last several days.  Ken called the phone number for the Denton Social Security office.  His call was forwarded to the Social Security National Center in Washington D.C.  The recording prompted him to choose from the following six things he could discuss.  None of these included the option to apply for benefits.  Wanting to meet face to face with an employee in the Social Security office (rather than struggle with a most unforgiving form on the computer) we drove to Denton.

Not so funny thing…as we pulled into the SS office parking lot, there were no cars, not one.  Ken got out of our car, and as he approached the front door, he spied a note saying, “Sorry for the inconvenience.  We are closed.”  Closed on a Wednesday mid-afternoon?  No explanation as to why or when they would reopen?  Made for tough duty to speak to someone in person.  Although my husband has mellowed with age, patience will never be his strong suit.  This lack of any success, combined with the phone call debacle, was taking its toll.

My husband deduced that if the SS office in Denton answered the phone the next day it would probably be an indication that the office was open…but do you really ever know for sure?  Unfortunately, the next day the call again rolled over to the National Office.  This time a recorded prompt specified that if you couldn’t choose from the following six options, the wait time to speak with a real live person would be 24 minutes or more.  Another terrific option was to leave your name and phone number and someone would get back to you within 30 minutes.  Almost at wit’s end, Ken begrudgingly left a name.  It was Olaf Klug.

Unbelievably, a computer did return the call within the stated time.  This was followed by a punishing session of security questions so as to make certain my husband was who he claimed to be.  So he had to fess up to not being Olaf Klug but did enjoy a very brief laugh after leaving the make-believe moniker.  Once he’d come clean he was transferred to a lovely young lady who explained that the Denton office had some building issues and that was the reason they were shut down.  She went above and beyond to be helpful and accommodating.  She garnered the first available benefits’ appointment for him which happened to be four weeks later in October.  She mentioned that he could go to the Denton location before then and without an appointment.  However, the wait in line would probably be pretty long.  Meanwhile she would hold his appointment.  Ken was so grateful for the excellent service she provided he told her she could take the rest of the day off!

Ken being Ken, wouldn’t have it but that we drive back up to the Denton office again.  This time the parking lot was plumb full.  People were streaming into the building but not many were coming out.  The “Sorry we’re closed” sign had been taken down and it looked like business as usual.  There was an armed guard milling around, whose primary mission was to enforce the “no drinks allowed” rule.  (Naturally, I got busted.)   When taking a break from this daunting task he kept busy answering the same question most everyone was asking:  “Why were you closed yesterday?”  He said it was an issue with mold.  (So here we are the next day, sitting in a stuffy, crowded room in a Federal building, with big sheets of thick plastic being the only thing between us and mold.)   How reassuring?

There was a large overhead screen display showing numbers for those next in line.  After getting assigned numbers from a machine located below we took our seats so we could hurry up and wait.  About two hours passed when Ken decided he’d had enough and asked the guard why numbers relative to the ones we had were not showing up on the screen.  Since we were there to file for benefits we were special, just like our number.  The guard said we’d have to wait for a specific agent who had to use a specific computer.  This made absolutely no sense to us.  But then neither had most of the events over the course of last two days.  The guard also conceded that he had no clue as to how long that would be.

Moments later our number was announced and we literally jumped out of our seats and raced to door number one.  (There was also a door number two and number three).  Getting through to the hidden back room was truly a feat…seemed like everything was such a secret.  Once on the other side the mystery was dispelled.  It was kinda dark back there and more of the huge plastic sheets covered the length of the room where a wall used to be.  The rep led us to a desk where a computer sat which had thrown up all of its wires.  There were dozens of others scattered throughout the room.  Everything was in a state of disarray.

“Now why are you here?” the agent began.  My husband explained about needing to enroll for his social security benefits.  The rep typed something on his computer and said, “You need an appointment for that.”  I looked over at my husband and waited for the top of his head to blow off…have you ever seen the TV show Braindead?

The agent picked right up on Ken’s dismay and reassured him that he could use a computer “over there” gesturing behind him.  Ken could go online and if he ran into a road block he could summon someone to come help him.  (This is on the heels of the rep telling us how slammed they were and short handed to boot.)   At this point, Ken decided he’d try to fill out the form online but in the comfort of his home office and out of the threat of mold.

Naturally, the online application was very involved and consisted of over eight screens.  One of Ken’s favorite parts was the “three choices of dates” option for receiving benefits: choice #1 had already passed weeks ago.  Choice #2 was in the current month with 12 days remaining.  And the 3rd date…January, next year, which would exclude the December 2016 payment with no way to recover.  It was a crap shoot.  So Ken shrugged and opted for the current month.  He forged ahead figuring at least this way, the online application could be compared to the one he’d get at the October appointment. He was trying so hard to avoid any unforeseen circumstances causing a problem in the near future.  So when he got to the very end of the last page, there was a prompt to click on the word “submit.”  This was followed by a warning indicating that once you did so any future appointments you had would be cancelled.  (Of course they would!)

I think when his appointment in October rolls around, and let us pray that he really does have an October meeting, that I will ply him with a couple of Xanax.  They’re really not very expensive and besides he’ll have all that Social Security money with which to pay!

0 0 0 0 0
Previous : The Soapbox: The Mamas of Friday Night Lights
Next : Add some eye candy to your garden this fall