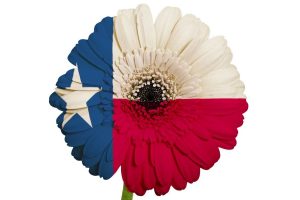 Welcome to North Central Texas where transplanted gardeners from more northerly latitudes go bonkers trying to figure out: (a) when the growing season starts and ends; and, (b) how come that local topsoil they bought in 40-pound bags turns into concrete after six-to-eight hours of exposure to full sun.

ITEM A: Did I mention this locale is blessed with two growing seasons each year?  The first one begins in mid-February and the second begins in mid-August.

On average, there are six sizzling weeks between the growing seasons, when most garden produce plants shut down operations, because it’s just too darned hot. Either the plants give up the ghost or go dormant, which gives the appearance of death. As soon as the air temperature drops below 100-degrees and a little rain pushes into the area, things green up. It’s like a second spring.

Vegetable seedlings that germinated in a greenhouse back in early July either are– or soon will appear– in nurseries and garden departments all over town. And, with a little luck and care, they will bear edibles before true winter weather barrels down from the Rockies around Christmas.

Now is the time to sow green beans, cucumbers and put in tomato seedlings for fall crops. For those who like to cook with fresh garlic, buy a couple of fresh heads from the grocery store, break them apart then push each clove into the soil pointy-side up. One clove takes about nine months to produce another head (harvest in mid-June); and, winter weather doesn’t bother the stuff at all.  Oh, and don’t forget onions, which should be appearing in bundles of about 50-slips any day now. If you see some lettuces grab a few. Just remember to keep plants and seeds well-hydrated if Mother Nature doesn’t donate to the cause. And, of course, protect the beans, ‘cukes, and tomatoes on frosty nights.

ITEM B: Several years ago a friend from Idaho installed a raised-bed veggie plot in her Lantana back yard. She planted things, gave them all a drink, then watched the ground dry out to a blonde crust that killed the seeds and seedlings. She’d gone to a local store and loaded the pickup with bags labeled topsoil to fill the beds.

Beware of sandy local commodities labeled “Topsoil.” True topsoil has several identifying characteristics: the color is dark brown, it’s dank-feeling and smelling, and it contains a generous serving of partially decomposed chips of wood, twigs, leaves, bark and other crumbly “dirt” materials. Consider filling or topping-off your beds with bags labeled “landscape mix.” It will cost a little more, but hold water and support microbial life. Blonde gritty “topsoil” stuff is usually a mix of sand and clay subsoil that turns into concrete when baked by Texas sun.

Here’s an Agri-Life Master Gardener secret: Texas has about 1,411 soil types and the thing they all have in common, unless they’re on the floor of a live forest, is that none contain true topsoil, which is organic matter in the throes of decomposition. Just because a backloader scraped it off the surface of the local landscape doesn’t mean you’re buying horticultural topsoil.