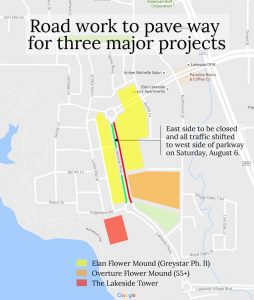 Construction began Saturday to rebuild Lakeside Parkway from the northern roundabout to the central roundabout in south Flower Mound.

Rebuilding both sides of Lakeside Parkway is expected to take nearly a year.

The roadwork is an integral part of the Elan Flower Mound project (a.k.a., Greystar Phase II) that is expected to begin construction in September.

Elan Flower Mound will offer 466 apartments and townhomes and include seven four-story buildings that will line both sides of Lakeside Parkway from Surrey to Edgemere (near the central roundabout). Most of the townhomes will be located in the interior of the project, off the parkway.

The two buildings between Surrey and the northern roundabout will include 15,000 square-feet of dedicated retail space on the ground floor.

The remaining five buildings will contain approximately 85,000 square-feet of “flex space” built to commercial specifications that may be converted from residential to retail use as the market warrants.

In addition to its importance to Elan Flower Mound, the road work on Lakeside Parkway will play a key role to two other projects that are already underway: The Lakeside Tower and Overture Flower Mound.

Overture is an age-restricted apartment project for those 55 and older that will include approximately 200 residences housed in two buildings, one three stories and one four stories.

With an esplanade and the Lakeside Trail running through it, Overture will afford residents with lots of walking options. And a 14,000-square-foot amenity center will offer residents access to a salon, kitchen, movie room, game room, bistro, pool and yoga/fitness center.

When the three projects are complete in approximately eighteen months, a total of 1,390 residences will be complete in Lakeside.