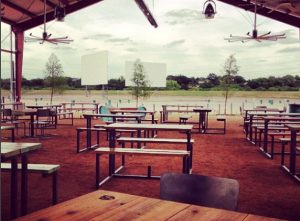 Drive-in theaters have been absent from Denton County since The Rancho in Denton closed in the 1980s. There hasn’t been a theater like it in Lewisville since one closed off Business 121 in the 1970s.

So when Fort Worth-based Coyote Drive-In announced plans to open Lewisville location, the community couldn’t get enough of the news.

The opening, which was once planned for late last year, will be postponed again after a series of delays in the planning stages when the theater realized it had space to add a sixth screen, and rain.

0 0 0 0 0
Previous : Entrepreneur Tip of the Week: Cool Companies
Next : Liberty grad is Cleveland-bound