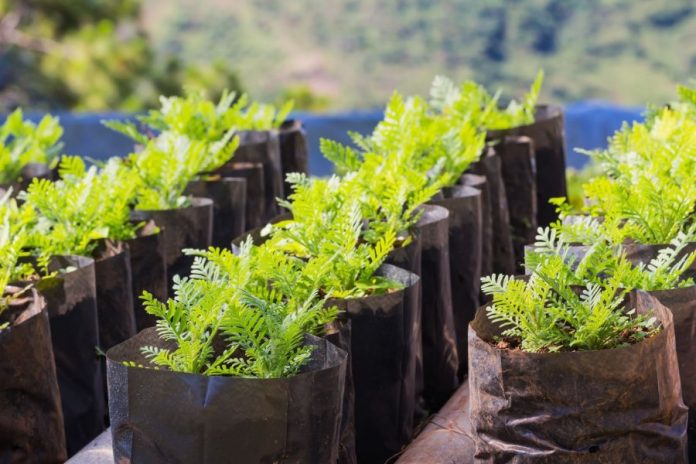 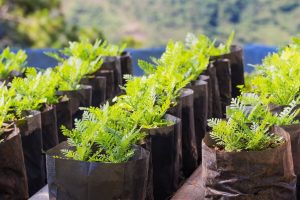 Ever wonder how nurseries get so many fresh little plants? Propagation is a word that describes humans deliberately causing plants to multiply.

There are five basic ways to produce a new plant: germinating a seed; taking a cutting; layering a stem; dividing a root; and, grafting a branch.

Those trays of little garden-ready vegetable plants that appear in the stores– starting in about February– every year began after Thanksgiving. First, as seeds sprinkled in special growing medium, then watered and kept warm until germination, then subjected to intense artificial light; until Mother Earth’s axis has tipped toward the sun to give us longer, brighter, warmer days and nights.

Every seed germinates into a genetically unique plant that arrives at the store or pokes a sprout up through the soil as a variation on a general theme like, say, Celebrity tomatoes, or Haas avocados.

The other four propagation techniques belong in “Mad Scientist-territory” we call cloning.  The gardener obtains a piece of a healthy plant, then creates circumstances that cause it to put out roots, stems and leaves to eventually grow on its own.  Think of a begonia stem in a glass of water, or the green top of a grocery store pineapple, or the trimmings from grapevines.  The clone is a piece of its parent that grows into an independent individual.

We layer a supple blackberry stem, for example, by bending it to the ground, removing stem leaves, nicking the bark on the underside of the stem then covering it with two-inches of soil and clamping the stem in place.  Here’s the sci-fi part of the story: in warm, moist, dark conditions the live plant stem tissues respond by reorganizing some cellular material to become new root cells. That will multiply; and, push through the nick into the soil.  Not always, but sometimes rooting can take as long as a year.  The eventual reward for patience is a whole, new, free plant can be detached and situated somewhere else.

Anyone who loves perennials learns to dig and divide the dense roots, bulbs and corms in autumn, then spread the pieces in other places, or give them to friends and neighbors to plant elsewhere.  Irises, daffodils and Shasta daisies come to mind.

Grafting is how fruit tree guys inject a fresh-cut twig into the branch of another tree, then cause the wound to heal; and, in extreme theory anyway, make one of those goofy 4-in-1 fruit trees you can buy from mail order nurseries.  Generally, nurserymen graft varieties of the same fruit tree to create new and improved products.

Here are a few rules-of-thumb for when to try your hand at various types of propagation:

Springtime is when to dig and cut newly rooted shoots from plants with creeping root systems, like blackberries, or creeping stems, like strawberries;

Winter is when to cut twigs from dormant hardwood trees and shrubs; and,

Digging and dividing happens after perennials settle down for the winter snooze.

Here’s a trick to perform with those ‘sucker’ stems you’re supposed to pinch from tomato vines in June.  Let them grow 4-6” in length, then obediently pinch off.  Strip all but the two-topmost sets of leaves, then insert the bottom half of the stem in moist sand or a 50/50 perlite/vermiculite growing mix.  Buy those two products at the nursery.  Use a fairly deep pot.  Create a little greenhouse from clear plastic– don’t let the plants touch the plastic.  Put the whole thing in indirect sunlight with even moisture for about 30-days.

When new growth appears, and the plants are well rooted, transplant and keep well hydrated through July and August for a tasty autumn crop.  Before the first killer frost, pick the green tomatoes, wrap loosely in pieces of brown paper grocery sack, store on the shady porch in a corrugated cardboard box.  Around Christmas the fruits will begin to turn red.  You’ll have great tomatoes through the end of February. Yum!