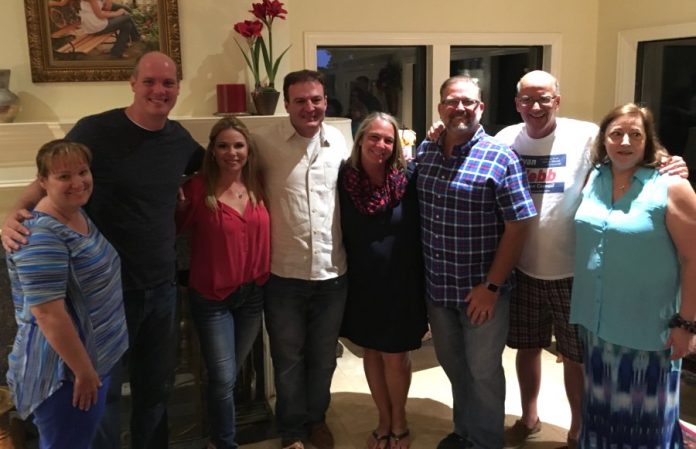 Flower Mound residents–at least the ones that bothered to vote–signaled their satisfaction with the town’s direction on Saturday.

Two-term incumbents Mayor Tom Hayden and Place 2 Councilman Bryan Webb, along with Planning and Zoning Commissioner Don McDaniel, and Board of Adjustments and the Oil and Gas Board of Appeals Commissioner Jason Webb, were swept into office.

In opposition were four candidates with a message to slow development and reduce residential density in the growing town where land values are white-hot.

Mayor Hayden easily fended off longtime resident Janvier Scott with 2,896 votes (64 percent) vs. Scott’s 1,475 or 33 percent. The third mayoral candidate, Jim Berendt, dropped out of the race April 20 and garnered 135 votes or 3 percent.

Hayden has served on Flower Mound’s Town Council for the past seven years, the past four as mayor.

“I am pleased Flower Mound voters have expressed their confidence in the direction our town is going in,” said Hayden on Saturday night. “I’d like to thank everyone who voted and all of the candidates who ran to serve the town we all love.”

Scott was compensated $100,000 by the town in 2015 for public access and a utility easement through her property which abuts several businesses. She ran on a platform of tree preservation and curbing new business incentives.

“This entire race was never about winning or losing for me. It was really about keeping the character of our town. I was just trying to do what I could to prevent the total paving of paradise. Either way, after all the support that I have received from friends old and new as well as total strangers; I knew I would feel like a winner. The efforts of our campaign friends has been incredible. Thank you to all the residents that supported us. We aren’t done. We have momentum,” Scott posted Saturday night on Facebook.

“The residents of Flower Mound spoke today” said Webb. “They appreciate the positive direction our town is going. I appreciate and am thankful for their support and confidence.”

Fambrough, who serves on the Flower Mound Animal Services Board, was thankful for her experience.

“…it appears I lost. But I won because I tried, and I won because I made some great new friends. Thanks to everyone who supported me, encouraged me and believed in me. It was a great learning experience and if nothing else at least I stood up for my convictions,” she posted on her Facebook campaign page.

McDaniel topped Jim Engel, who expressed his opposition to the increased density in Flower Mound, 2,644 to 1,729 votes (61 to 40 percent) for Steve Dixon’s Place 4 seat.

McDaniel is currently in his third term on the town’s Planning and Zoning Commission. He also served two terms on the Transportation Commission and held board positions for both the Wellington Elementary and McKamy Middle School PTAs, including being a representative on the LISD Council of PTAs Board of Directors and the LISD Bond Oversight Committee.

“I look forward to serving our town with the same passion and dedication that won this election. It all starts with a conversation and I am looking forward to many of those,” said McDaniel.

Jason Webb prevailed over Cathy Strathmann in a Special Election for the unexpired one-year term in Place 1 by a count of 2,636 votes (60 percent) to 1,742 votes (40 percent)

Webb, 41, is a Leadership Coach and Manager for Chick-fil-A and currently sits on the town’s Board of Adjustments and the Oil and Gas Board of Appeals.

“I am so proud to have the chance to represent the people of Flower Mound. I will represent them with honor, dignity, and respect,” said Webb. “As we continue to grow I will uphold the standards which have made Flower Mound a unique and desirable place to do business.”