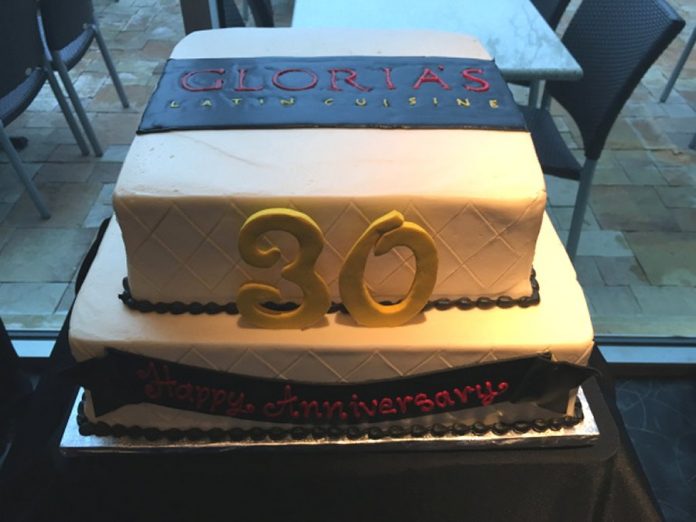 The moment you’ve ALL been waiting for…

This past Wednesday, our team had the wonderful opportunity to attend the 30th Anniversary Celebration and Grand Opening of the Flower Mound location of Gloria’s Latin Cuisine! It was such an honor for us to celebrate two momentous occasions for the Fuentes family and to check out their new Flower Mound location – which is incredible by the way with its modern decor and architecture and its HUGE patio area.

If you didn’t read our previous post about Gloria’s, we’ll recap the incredible story for you here. Jose and Gloria Fuentes came to America from El Salvador in 1978 to escape the civil war and unrest happening in their home country. They met in Houston and then relocated to Dallas where they both worked a small Salvadorian restaurant owned by Gloria’s sister in Oak Cliff. After a year of working for her sister, Gloria and Jose took over operations of the restaurant, and in 1986 they opened the first Gloria’s Latin Cuisine.

Now 30 years later, they just opened their 17th location (with more on the way), and continue to share their love for their native cuisine with residents of Texas. But the most amazing thing to me is that even with all of those locations, Gloria’s is STILL family owned and operated. Read more about the family here.

And we could feel that at the celebration this week. It was a true family affair – and we felt like a part of the family! We even had the chance to take our picture with Gloria (which was completely awesome).

Gloria and Jose have artfully crafted their menu over the years, pulling flavors from their home country of El Salvador, as well as flavors and dishes from Mexico and other Latin American countries.

So, join in the celebration of 30 years of Gloria’s and their new location right here in Flower Mound! Tonight would be a perfect night to sit out on their patio and enjoy some food and one of their famous margaritas.