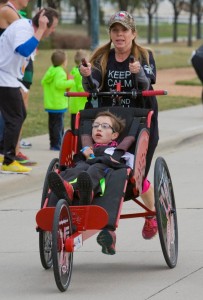 “Ainsley’s Angels of America is not an organization, but a ‘family’ focused on joy, acceptance and that everyone should be included,” said Kim “Rooster” Rossiter, Ainsley’s father and founder of the national non-profit.

When Ainsley went for her first jog in a specially-designed wheelchair during a local road race in 2008, she gave a radiant wind-induced smile that anyone would envy.
The North Texas Ainsley’s Angels chapter, based in Bartonville, is the fourth regional group in Texas. The mission of Ainsley’s Angels is to build awareness about America’s special needs community through inclusion and advocacy one step at a time, literally.

The purpose of the organization is to ensure that everyone can experience the thrill and excitement of participating in an endurance event such as a 5K, 10K and beyond, by using special running chairs and volunteer runners who push the “athletes.”

Knowing that Denton County is a rapidly-growing area that includes many with varying special needs, North Texas Ambassador Trish Robinson said the members of the new chapter formed in 2015 wanted to offer the same opportunity to others in local communities.

“As a parent of a special needs child, I understand first hand how physical activities can be a challenge, not only for him to participate, but for all of us to do something together as a family,” said Robinson. “It always seemed as though we had to split up to do activities. We never thought that doing races together would be a reality.

“However, through the use of a special running chair and the support of Ainsley’s Angels, our family found an amazing opportunity to participate in local races and, most importantly, a way for my son to get off the sidelines and experience the finish line.”

“Though some of our athletes may not be able to move their bodies in an aerobic way, they do get the awareness, mental input and– most importantly– the opportunity to participate directly in a race that otherwise would exclude them, simply because their bodies aren’t able to complete in the race on their own,” said Robinson.

And, since able-bodied people are paired with the rider “athletes,” the benefit is mutual. Volunteers develop a purpose to their running; to make it meaningful for another. Even if running isn’t something people wish to do, they have the means to encourage the rider athletes and volunteers from the sidelines by being a buddy at the starting line, a smile at the finish line, or giving a few high fives along the way.

“As a working professional and mother of three, exercise could rank low on my priority list,” said Robinson. “But, because I know someone is depending on me to lend my legs to simply feel the wind in his face, I remember why keeping physically strong is so important.  And for that, I am most grateful.”

Through the group’s participation in those races, awareness is spreading to many other local races located in places like Highland Village, Fort Worth, McKinney– and even at the Texas Rangers Globe Life Park in Arlington– for the Labor Day 5K. In addition, the North Texas chapter has traveled to Austin, Houston and Louisiana to make appearances in endurance events and to show others that everyone can participate.

“In 2016, we will be joining wheelchair athletes and volunteers from other states in races such as the Louisiana Marathon in January,” said Robinson. “And we would love to bring riders from here in our own backyard, so to speak. Currently, our North Texas chapter has four special chairs and a strong desire to add more as funds are raised.”

The North Texas Ainsley’s Angels chapter is putting together a race calendar for 2016 and invites everyone in Denton County to become actively involved in an incredible mission.

“Our calendar will consist of at least one race opportunity per month,” said Robinson. “We want those who find themselves sitting out, to know that we will change that– at no cost—and will provide a way to participate.  We want others to find the motivation they need to participate in endurance events – if they can’t find the energy to go out and run for their own benefit, we can show them how much it means for them to run for someone who would otherwise not know what that feeling means.”

The group invites companies, civic and religious organizations to come together as a team and be a part of the races. In addition, they are asking organizations, which are hosting race events, to consider granting permission to allow the Ainsley’s Angels wheelchair athletes to participate.

“Furthermore, we have no age limit,” said Robinson. “Thus far, our youngest rider has been seven-years old and our oldest has been 49. Just as physical and mental abilities shouldn’t be limitations, neither should age.”

There is never a charge for rider athletes to race and volunteers simply register for each event as they would normally do and donate $20 for an Ainsley’s Angels shirt to be worn at all race events, if they are able to do so.

0 0 0 0 0
Previous : Parker: Eradicating Child Abuse at All Levels
Next : Bridges elected to HOA board