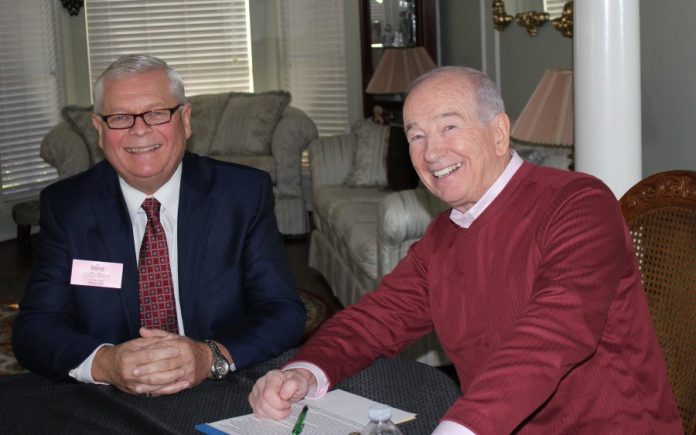 If you’re a registered member of a political party and vote regularly for candidates to represent you in public office, you probably know that the electoral process takes organization, planning and facilitation by those within the party. That is to say; those vital functions don’t just happen, someone has to take the lead in carrying them out.

For the past 13 years, the Denton County Republican Party has been led by Dianne Edmondson, who has, by any measure of success, created a triumphant formula for the GOP. Now that Ms. Edmondson is stepping down to run for a position on the state Republican Executive Committee, her vice-chair, Kelly Sayre, has decided to run for her seat.

Mr. Sayre, a native Texan, a longtime business owner and Republican Party activist, said he intends to continue to work toward electing people with conservative Republican values. “I’m the tested and ready and experienced candidate, ready to run the party and run the party primary election with integrity,” he said. Kelly added that the chair and the first vice-chair are restricted from endorsing or showing any public partiality. However, he said precinct chairs can endorse and are often involved in some of the races.

If elected, Kelly said he’d like to begin something called, “Meet the Chairman,” a monthly get-together with Republicans throughout the county in an effort to bring in other like-minded, values-oriented people into a continually expanding GOP.  “I want to let any voter in the county come in to talk about any issues they care to address.”

Kelly will be campaigning for the position in several ways, including some door-to-door introductions and some fundraisers to help with expenses for advertising purposes. He will also be debating his opponent, Lisa Hendrickson, who was the subject of one of my interviews last week. “I’ve already agreed to the first debate with my opponent on January 5th, at Lake Dallas City Hall,” Kelly said. The debate will be organized by Shirley Spellerberg of the Denton County Republican Assembly.

On December 15, Kelly will be having a debate watch party (televised GOP presidential debate) at 6 p.m. at the Drunken Donkey in Corinth, in coordination with the Young Republicans of Denton. “I’ll be sponsoring the food and we welcome everyone to come out and join us,” he said. Part of the debate watch party is something called the “Ugly Christmas Sweater” contest. “You come in with the ugliest sweater you got and let’s see who can win that competition,” he said with a wide smile. There is much more to learn about Kelly Sayre in the video below.