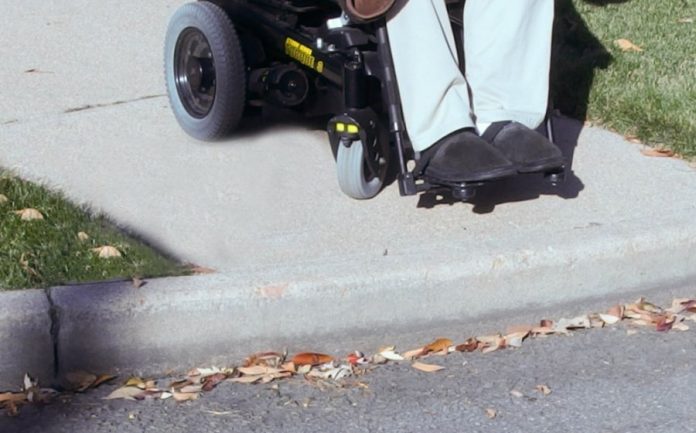 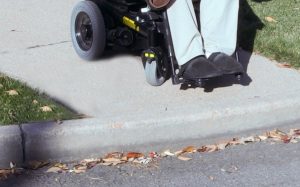 Announcing that 2015 marks the 25th anniversary of the passage of the Americans with Disabilities Act (ADA), Brian Shamburger of Kimley-Horn and Associates began a detailed presentation outlining what Flower Mound needs to address to comply with ADA requirements at Monday night’s town council meeting.

He explained that ADA Title II covers any agency that receives federal funding, such as state and local governments and educational institutions. He also pointed out that ADA is a civil rights law.

He included a list of steps recommended by the consulting firm and many photos of things around town that illustrated specific areas to be addressed.

Requirements for local governments are: develop a grievance procedure; designate an ADA coordinator the public can contact; perform and retain a self-evaluation plan for three years; develop a transition plan of structural changes needed for compliance; and, inform the public of their rights and ADA protections.

“The idea is to adopt the transition plan and from that point on we have 15-years, 2025, to correct the deficiencies,” said Debra Wallace, assistant town manager/CFO and designated ADA coordinator. “Once the plan is adopted, we can prioritize which ones we do first and what year we do them.”

Flower Mound is one of only a few North Texas municipalities that have proactively and officially adopted an ADA Transition Plan, according to town officials.

“Keep in mind, that this was a requirement to be completed by 1993,” said consultant Kristi Avalos, president/CEO and founder of Accessology, which is based in McKinney. The consulting firm specializes in disability and engineering services.

She also pointed out that all the federal agencies have agreed that if the requirements aren’t done voluntarily, they will start to use financial reprimands, such as to withhold federal funds and grants. She added that most state DOTs are now doing just that.

Asked what the impact of not approving and completing the work because it’s too expensive might be, Meredith said the town could be sued civilly by an impacted individual could range from a few thousand to hundreds of thousands of dollars.

“Once we take this first step, the next step is to prioritize what needs to be done first,” said Wallace. “I think you have to address all of it within the 15 year time frame. We’re just leaving ourselves open for that litigation, as well as the possibility of losing the grant funding.”

Councilman Bryan Webb suggested asking what public concerns have been in the past few years to help prioritize what needs to be done first.

Councilman Steve Dixon added that the first priority should be access and to make sure every resident has mobility. After that, it should come down to what makes sense.

Town Manager Jimmy Stathatos said that this [need for action] is not something the staff is pushing; it’s to inform the council about what the potential liability might be.

“In the event there is a lawsuit, we don’t want to increase the town’s exposure administratively,” he said. “We’ll try to get the most ‘band for our buck.’ Everything will be brought back to council to approve; staff will have options that make the most sense.”

Shamburger said that part of the plan is a list of priorities that have already been created and Avalos added that it’s a 12-step priority list.

“We have been diligently working on this plan since 2013 and look forward to implementing its recommendations,” said Dixon. “It’s important for our entire community to be able to fully enjoy Flower Mound.”

The next ADA-related vote by council will involve implementation of the plan, by priority selection and spending money. That may not be a unanimous decision.