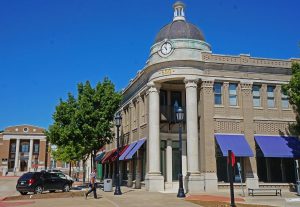 Flower Mound is just about ready to pull the trigger on a place for budding business owners to be inspired.

Council members in February approved spending $15,000 to investigate the feasibility of funding an entrepreneurial center to help both existing and proposed businesses in the town.

“The town has pursued some kind of small business incubator over the past several years, but we’ve come up short,” said Flower Mound’s Director of Economic Development Mark Woods.

“The study came back with a ‘yes’ for a center here. The National Business Incubator Assoc. reports that 84-percent of businesses which start in a community will stay and grow in that community. The new center will be a great asset to our community.”

“I know that there are at least four or five cities looking to develop the same kind of thing,” said Jason Adams, chief executive officer of Day One Consulting, itself founded in Flower Mound.

Another of his companies, Curious Marketplaces, worked with McKinney officials over the past six years to create and develop the community’s entrepreneurial center. He launched the Collide Center in McKinney, which spawned into McKinney Werx and the Collide Village incubator in Addison. It follows similar success in Kansas City, which has a Kansas City Startup Village for entrepreneurial businesses.

In his July 20 presentation of the study results to council members, Wood outlined major components of the center, including its location in Parker Square, financing and sponsorship options, management structure and launch plan.

A project budget and tenant lease will be presented for approval to the council during an October meeting and, if approved, the center is anticipated to open by the beginning of 2016.

“The next funding would be to lease space with the new owners of Parker Square, plus management costs for running the center,” said Wood. “The funds will come from monies recaptured over the past several years and won’t exceed the current Economic Development budget. Then, donations, corporate sponsorships and membership fees will sponsor the center.”

Adam’s company will set-up the center as a non-profit and manage it for its first three years, after which it should be self-sustaining through sponsors, mentors and members.