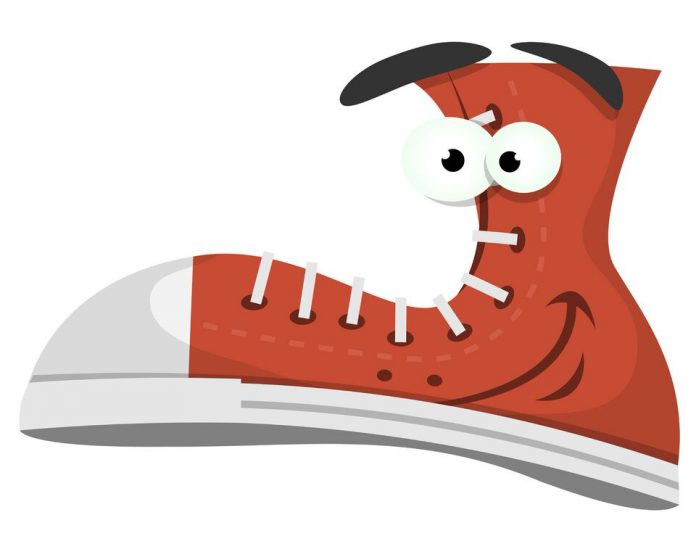 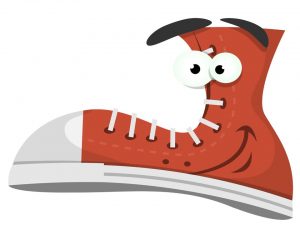 I’ve always had a thing about shoes…starting with my early childhood memories: I was probably around five years old when I asked my mom if I could play dress-up in a pair of her pumps.  After tiring of my whining she finally gave in a granted my wish.  There was one caveat, however; I must not go near the steps that led to the basement.  So I hurriedly donned the heels (the fit was sloppy at best) and clomped my way directly to the forbidden stairs.

Wobbly as I was, it took no time at all before I was pitched forward and began my bumpy decent.  (What a trip!)  Thank God there was a landing just below the fifth step.  That was all that stood in the way of seven more steps and a concrete floor.  Mom heard the commotion and came running full tilt.

After checking me over for any broken body parts she gave me a stern tongue lashing followed by a thorough spanking.  At the time I thought she had over reacted, I mean it’s not like I ruined her shoes or anything.  You’d think an experience like that would have made me a little shoe shy but it actually had just the opposite effect.  When I grew old enough to wear heels I always bought stilettos, the higher the heel the better.  I learned to walk in them without falling over or turning my ankle and the heels on these babies made my mom’s shoes seem like child’s play.

When I got older I found my closet was loaded with high heels I could no longer wear.  They were uncomfortable, pinched my feet and played hell with my balance.  They’d always been uncomfortable but when you’re young you sacrifice comfort for “the look.”  I began buying shoes with lower heals and then graduated to flats and flip flops.  (Of course tennis shoes were a mainstay.)  Owning just a few good pairs of sandals satisfied me.  And the ones with cushioned insteps really did the trick.

It was a pair of these wonderful sandals, with a spongy insole, that I wore on our last plane trip.  They made going through airport security a breeze.  And all that walking to the gate was done with ease.

I heard, for the first time ever, an announcement over the intercom saying, “Would the individual who left one of their shoes at security please come and claim it?”  This was repeated three times at various intervals and had every passenger at every gate in stitches.  I mean really?  How could you be hobbling around the airport and not notice you were only wearing one shoe?!

Now I digress just a bit in order to explain another shoe situation: there’s an email that comes around at least once a year that’s entitled, For all the men in our lives who ask, “What took you so long in the restroom?”  It is a hysterical account of what women endure in public potties.  And one of the dilemmas that is described is the stubborn toilet paper that sticks to the bottom of shoes, any kind of shoe.  While I laugh uproariously every time I read it I’d never experienced the toilet paper predicament until this last trip.

Oblivious to the streamer attached to the bottom of my shoe, I left the restroom feeling relieved and ready for a large, Starbucks’ frappuccino mocha (“lite” who am I kidding)?  I found the coffee stand located a good distance from the gate but since my sandals were so comfy I didn’t mind the walk and neither did the toilet paper.  A short distance up the way was a magazine shop so I went there as well with TP in attendance.  It was getting on to be time to board the plane so I headed for the gate.  Guess who was still with me?

It wasn’t until I sat down in my seat and bent over to shove my purse under the seat in front of me that I noticed something white, long and sticky on the floor. As I tried to pick it up it broke off in pieces until it dawned on me what I was dealing with.  Ick!  Since it had accompanied me throughout the airport it had developed a fondness that it didn’t want to give up.  It was as determined as a gooey piece of gum.

I sat there, with this wad of nasty stuff in my hand, wondering why not one single person hadn’t stopped me to prevent any further embarrassment.  I decided they, too, must have read the email and found my bad luck quite laughable.  (Dweebs.)

When we arrived in St. Louis I couldn’t wait to change shoes and give my travelers a good ‘soleful’ scrubbing.  It should come as no surprise that I had nine pairs to choose from.  We were to be in town for five days and I’d packed for two weeks.  My philosophy on this is that you just never know which pair of shoes you’ll want to wear with which outfit.  (I always pack two weeks worth of clothing, too.)  I chose a pair of flip flops, which I wore throughout most of the trip.  The other eight pairs turned out to be just more stuff to cram into my suitcase.

In closing I guess the lesson here is:

Watch your step and never let your shoes ‘defeet’ you!