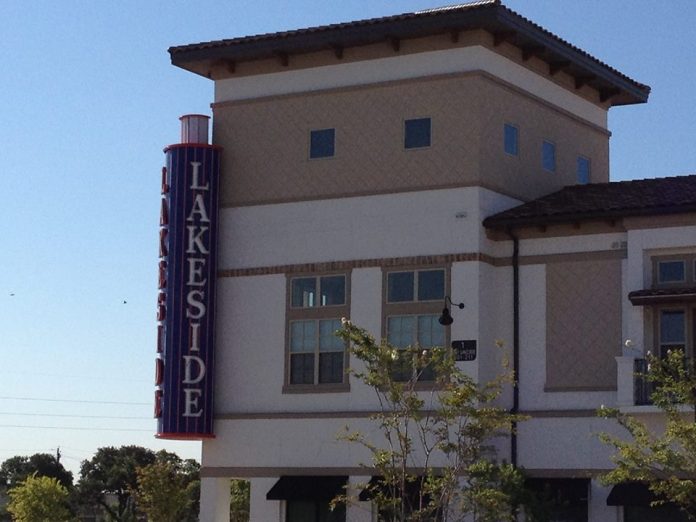 Two businesses are now open at Lakeside DFW, with one holding frontage on FM 2499. But the branding and visibility of what’s to come has lacked, leaving some residents wondering what exactly has come to town.

As of last week, a 30-foot-tall LED sign prominently identifies The Shops at Lakeside in Flower Mound. The vertical sign is attached to a corner building at the entrance and is designed to attract attention any time of day or night. It weighs 1,900 pounds and was approved in March.

“We think it conveys Lakeside’s energy and dynamism,” Richard Myers, managing partner of Realty Capital,said recently in a website post. Realty Capital is the master developer of Lakeside DFW.

Flower Mound resident Kris Thompson said that it is important Lakeside’s businesses are successful but said the sign is a little much.

“Unfortunately, this sign was met with disapproval by some Lakeside DFW residents who spoke against it before Planning and Zoning as well as Town Council due to its size and brightness,” said Thompson. “I think it would have been best for the long term success of their businesses and their relationships with their residents if they had toned the sign down as requested as opposed to drawing negative attention to their development in this manner.”

As of today, Bottle & Bottega and Majestic Nail Spa are open for business at Lakeside. Developers expect Engel & Volkers and The Lodge Barbershop to open sometime this month.

Residents can look forward to several new restaurants with unveilings planned for September. Those are: Carvao Prime Brazillian Steak House; Taverna del Lago; and Paradise Bistro & Café. Other shops should be opening throughout the summer and into the fall.

The LED sign was designed by Starlite Sign in Denton, which also worked on the famed Pegasus signs in Dallas.

The Cross Timbers Gazette will keep you updated about new businesses as they open.