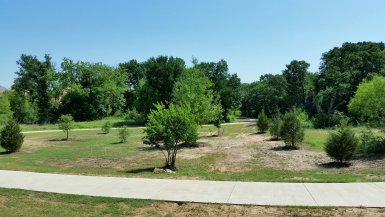 Lantana has a few more trees thanks to donations from sponsors of the recent Earth Day festival.

Gold Landscape planted 14 trees and shrubs next to the hike and bike trail just east of Stacee Lane adjacent to the Isabel subdivision. A solar powered irrigation system was also installed in the area.

Officials from Lantana’s two fresh water districts are eyeing the area as a future home for several outdoor fitness stations if the districts can secure a grant from Denton County Development District #4, which collects sales taxes in Lantana.

District #4 receives a half-cent of Lantana’s 6.75 percent sales tax and is charged with allocating tax dollars in an effort to drive tourism to Denton County.

Participation was good at the annual Earth Day event held in late April, according to Lantana General Manager Kevin Mercer.

“It’s always shocking how much stuff we accumulate in our homes and garages that would be unsafe or harmful to dispose of via our regular trash service,” said Jim VanVickle, a Fresh Water Supply District #6 board member.

In addition, 5,000 pounds of paper was shredded at the event, added Fresh Water Supply District #6 board member Donna Robichaux, who sponsors a ProShred shredding truck on Earth Day each year.