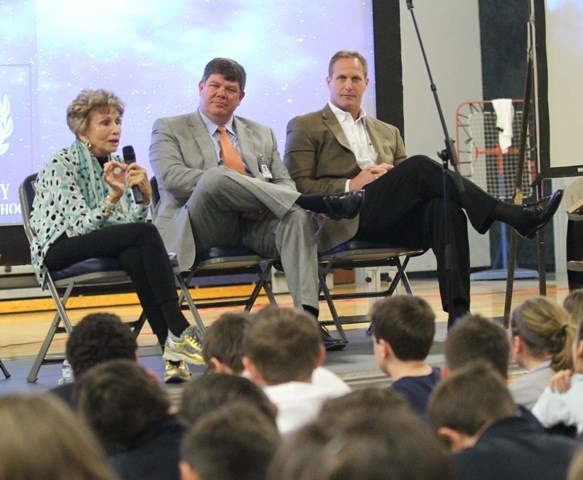 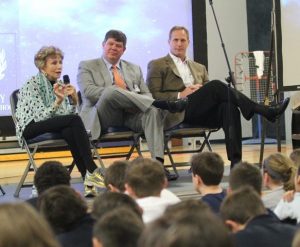 When Dr. Edie Eger stepped onto Liberty Christian’s campus for the second time in two years, she once again captivated students’ attention with her stories of surviving the Auschwitz prison camp in World War II and the valuable life lessons that have carried her through life.

Introduced by Dallas Cowboys’ three-time Super Bowl Champion Chad Hennings, who calls her his adopted grandmother, Dr. Eger recently shared her wisdom to the hundreds of 5th through 12th grade students who were seeing for themselves one of the last survivors of the Nazi prison camps.

“We don’t appreciate what we have until we lose it,” said Dr. Eger. “Even bread is hard for me to throw away because of what I went through.”

In 1944, Dr. Eger’s family was taken captive by the Nazis. Upon arrival to the concentration camp known as Auschwitz, her father was immediately separated from the rest of the family, and they never saw him again. The last words she heard from her mother were, “No one can take from you what you put in your mind.”

Through her life, Dr. Eger said she has learned not to fight or flee, but to flow.

“My enemies, the soldiers in Auschwitz, were the true prisoners, not me,” she said.

“Anger gives power to someone else,” she added. “We all have the power to be warm and loving or cold and stiff.”

As a teenage ballerina, Edie even danced in Auschwitz for the “Angel of Death,” Dr. Josef Mengele. She did indeed see death, disease, and destruction every day for a year in that camp. She said that even when they showered, they did not know if gas or water would spray from the nozzles.

“Throughout the experience, I changed hatred to pity,” she said. “If I hated today, I would still be a prisoner.”

Dr. Eger, who knew Corrie ten Boom of the “Hiding Place,” told students that the love of Jesus is unconditional.

“Jesus said, ‘Father, forgive them,’” she said. “To be Christ-like and to forgive is to be free!”

Now as a clinical psychologist, Dr. Eger helps others face their fear, accept adversity, and use it to their advantage.

“The only thing we have is the present,” she said. “In class, be there 100 percent with your teacher.”

She emboldened students to do well in school, saying that if they did, many doors will open to them.

“If you look at your birth certificate, you are not going to read that life is easy or that there is certainty or a guarantee, but there is probability,” she said.

She now looks back and calls Auschwitz her schoolroom, and she never stopped believing that God was with her during her imprisonment. As the war ended, guards mistook her for dead and tossed her body into a mass grave. An American GI saw her hand move and realized she was not dead yet. She weighed only 40 pounds and had a broken back, but she had survived.

When Dr. Eger came to America, she was penniless, not even having the $6 to get off the boat.

“Yet I had no time to be a victim,” she said. “Remember, do not settle in the valley. It is temporary, and you can survive it.”

She told students that it is OK to be disappointed but not discouraged.

“No one can replace you,” she said. “You are unique – God only made one you!

“Jesus said to love others as you love yourself. I tell myself ‘I am beautiful!’ We are no less or greater than anyone else. We are all special.”

Mr. Hennings, in his introduction, told students he met Dr. Eger when she spoke at Wingmen, an organization whose mission is to bring men closer to Christ.

He said that after his retirement from the Air Force and then the Cowboys, he struggled with his identify and purpose in life.

He said he was greatly helped by reading a book from another Auschwitz survivor, Victor Frankl, who wrote “Man’s Search for Meaning.” Mr. Hennings announced to students that Dr. Eger is writing a book much like it, a female version of Frankl’s book, to be released later this year.

Mike Hogg, a Liberty administrator who had a large part in bringing Dr. Eger to Liberty, said he greatly admires Dr. Eger, saying that even with losing her parents and experiencing illness and starvation, she has taken her pain and used it for good.

Campus Pastor Chris Searcy also shared with students the profound impact this time with Dr. Eger could have on their lives.

He said, “These moments are going to be what you remember and talk about with your children someday when you become parents.”

After Dr. Eger’s inspiring message, she took time to visit with individual students, hugging them and encouraging them, as they came to meet a woman who had endured so much and now helps so many.

Vivian Nichols is part of the public relations team with Liberty Christian School.