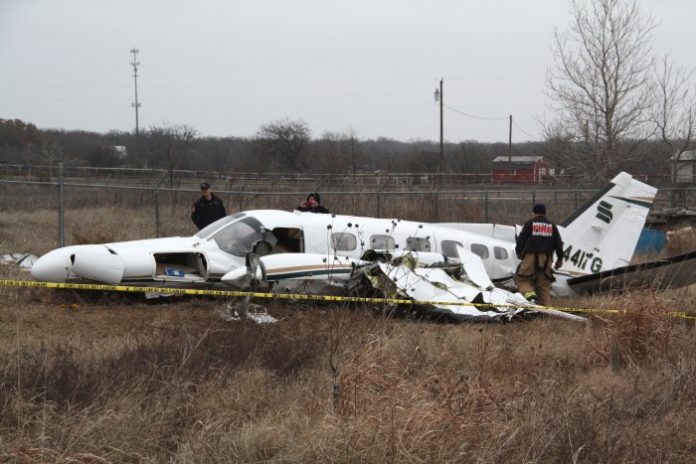 A pilot killed when a small plane crashed Wednesday night in a field near Liberty Christian School in Argyle has been identified as William Blake Graves, 52, of Flower Mound.

The twin-engine Cessna 441 turbo prop plane was on approach to Denton Enterprise Airport shortly after 9 p.m. when the crash occurred in a grassy area of a construction site in the 1400 block of Stonecrest Road, according to Sgt. Lonny Haschel, spokesman for the Texas Department of Transportation.

There were no other people on the plane, which could carry up to eight passengers, according to authorities.

The National Transportation Safety Board and Federal Aviation Administration officials are conducting an investigation into the cause of the plane crash.

The Denton County Sheriff’s Office began receiving 911 calls around 9:10 p.m. from residents near Liberty Christian School and along Hwy. 377, Haschel said, adding that people could hear the aircraft overhead.

Once reports began coming in, law enforcement and rescue crews were dispatched to find the plane, he said. Crews from Argyle, Flower Mound, the sheriff’s office and DPS responded to the scene.

Haschel said weather conditions at the time were misty. The plane was largely intact though the fuel tanks had ruptured, he added.

Graves was a 1984 graduate of the University of Georgia with a bachelor’s degree in business administration. He was the chief executive officer of Dirt to Dough Consulting, a company incorporated in Texas in 2013. The company has existed since June

1984, according to Graves’ LinkedIn profile. Before moving to Flower Mound, the family lived in Willmar, Minnesota.

According to a profile on the Domino’s Franchisee Association website, Graves started as a Domino’s Pizza driver in 1981, becoming a franchisee four years later in Willmar. He operated 94 stores in nine states under the parent company of Dough Management, Inc. He also served on the Willmar Airport Relocation Committee, among other boards.

Graves was married and had six children.