After a heated exchange during this week’s Argyle Town Council meeting, a display honoring fallen U.S. soldiers has been taken down from the town’s council chambers.

At the Town Council’s Sept. 7, 2021 meeting, the council held a ceremony and set up 13 U.S. flags on the council dais in honor of 13 U.S. Military soldiers who were killed in August 2021 when a bomb exploded at the Kabul airport in Afghanistan. The flags have stood in a line behind the council members’ seats since then.

During the Oct. 17 meeting, the council unanimously agreed to use $5,000 to purchase 100 U.S. flags — to combine with the current 53 flags the town owns — for a Veterans Day display along Hwy 377. Councilman Ron Schmidt made an amendment to the agenda item during that meeting that the town would use the 13 flags on the dais for the Hwy 377 display. The amendment was unanimously approved by council.

Five days later, Mayor Bryan Livingston posted on his public Facebook page that his family donated the money needed to buy 13 more flags, and he said that therefore the council’s decision would not be followed: “To be clear, we will not be using the 13 memorial flags in the council chambers … those flags will remain in place.” He also posted a link to a GoFundMe that has raised more than $2,000 for more U.S. flags for the town.

Then an item was added to this week’s council meeting agenda to clarify if the display on the dais should stay up because of Livingston’s donation, or still be taken down as council had directed.

Monday night’s council discussion quickly devolved into a back-and-forth between Livingston and Schmidt, as it often does. Livingston said he thought it was important to keep the display, while Schmidt said he would prefer to take it down and put up a permanent memorial later. He believed the display was meant to be a temporary one, and he didn’t think it was being done properly.

“If you were to come up here and look at how these flags are displayed, you would shudder,” he said to veterans in the audience. “The flags are leaning against the wall … It’s not right.”

Schmidt went on to accuse Livingston of making a “spectacle” of the situation, which he said was “dishonoring the flag.” Livingston fought to keep the 13 flags on display on the dais because he had provided replacements so that they could stay up. He said he thought council only wanted to take them down for budgetary reasons and that council members would want to keep them up if he provided replacements.

“I believe it is inappropriate to take these flags down,” Livingston said. “If the flags are pulled down, the flags are no longer a memorial.”

Council member Cyndi Hermann took issue with how Livingston was interrupting Schmidt and the town attorney, and said he was “making it about who loves the flag more.” She said it would not be dishonorable to take the display down to use the flags for the Veterans Day road display.

Mayor Pro Tem Rick Bradford then spoke up, supporting Schmidt’s opinion that the temporary display was not being done properly — “The lack of honor in the way these are displayed is disgraceful.” — and a permanent memorial would be better. Bradford, an outspoken critic of Livingston’s, criticized Livingston for not following the council’s decision from the previous meeting.

“This contest about whether you’re more patriotic than us is ridiculous,” Bradford said to Livingston. “The council made a decision, and it should stand and the mayor should enforce it. If he will not, as mayor pro tem, I will.”

Town Attorney Patricia Adams then said that she and Town Administrator Erika McComis felt caught in the middle of the confusion between Livingston and Schmidt. Council member Sherri Myers said she liked the 13-flag display, but she thought the unanimous council decision should be honored and they should be taken down in an honorable manner. 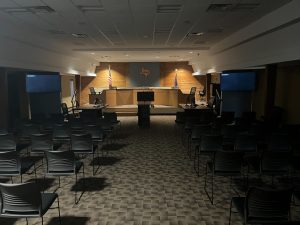 The council then voted 3-1 to affirm its previous decision, adding an amendment to not put the 13 flags back on the dais, but instead pursue a permanent memorial. Myers was the lone vote against it, saying she wanted the 13 flags to be returned to the dais until a permanent memorial could be discussed further. Before the final votes could be cast, Livingston paused one last time to make sure council understood the effect of its decision.

“I just want to make sure that we’re all perfectly aware that these flags will go away and they won’t come back,” Livingston said, soliciting further discussion and receiving none except a “Get on with it” from Schmidt.

The 13 flags are no longer in the council chambers.