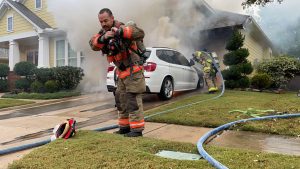 Firefighters responded to and quickly doused a vehicle fire that spread to a house in Lantana on Wednesday morning.

Denton County Emergency Services District No. 1 (formerly known as Argyle Fire District) crews were dispatched around 9:20 a.m. to the fire in the 800 block of Bradford Street, near Rayzor Elementary School. They found that the vehicle was parked in the driveway, a few feet from the garage door, and the fire was spreading to the front of the house. Firefighters brought the fire under control within a few minutes.

Fire officials don’t know how the fire started, said EMS Division Chief Brady Beard. The homeowner told firefighters that he had driven the car about an hour before the fire was reported, but they don’t know what caused the fire.