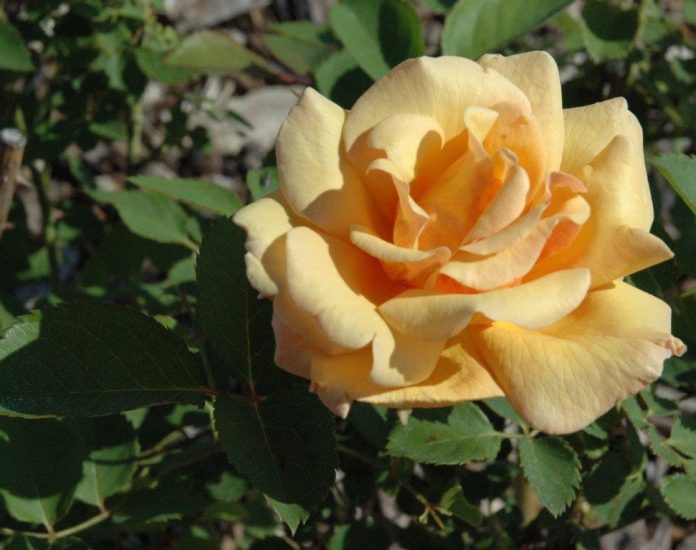 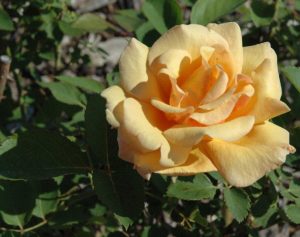 Modern rosebushes are only about 5,000 genetic variations from their 40,000 year old fossil ancestors found in Colorado.  If you like genetic change in multi-million year increments, roses are not for you.

Really old Chinese notes indicate Asian gardeners cultivated wild roses about the same time people in the Nile valley started their first pyramid.  As a matter of fact, give or take a thousand years, somewhere in the neighborhood of our year 0, Asian gardeners wiled away free time in huge parks of roses.  Closer to home the Romans blew wads of cold cash on roses shipped in from their Egyptian neighbors who knew a great business opportunity when they saw one.

By the late 1800s Asian wild roses arrived in the Home of The Free and Land of The Brave, to be used as living fences because cattle refused to walk upon or eat them.   State bureaucrats got into the act by using the newcomers to beautify roadsides.  The shrubs didn’t take long to overrun the place.

In 1941 the tip of a disease iceberg surfaced in the ranch and road byways.  It was called Rose Rosette Disease (RRD).  The beastie appeared to have no appetite for modern roses until the breeding division of a Pennsylvania company called Star Rose struck the genetic and economic motherlode with its no-maintenance, disease-resistant, Knock Out Rose.  A totally false narrative took the nation by storm:  Knock Out Roses don’t need water, food, or pruning.  Don’t believe everything you hear.

Several years ago it became evident Knock Outs had zero resistance to RRD which is a virus that hitchhikes hither and yon on microscopic windborne mites.  As one internet wag commented, RRD is kryptonite to the superman called a Knock Out Rose.  The virus gets under the bush’s skin, and has a heyday.  What’s a rose lover to do?

Infected shrubs should be removed.  Thoroughly police the soil to remove all scraps of rose roots because they will continue to harbor the virus.  Buy new roses only from reputable suppliers.  Carefully inspect new plants before you put them in the ground.  If the canes have been attacked by an obvious army of rubbery little thorns or the leaves look densely abnormal, take them back.

Consider growing other varieties of Earth-Kind roses, so designated by A&M’s AgriLife Extension Service because they have time and again demonstrated outstanding performance in Texas landscapes.  Think about the size shrub you want: dwarf (3’ x 3’), small (4’ x 4’), medium (5’ x 5’), mannerly climbers (10’ tall x 7’ wide), and vigorous climbers (15-20’ tall by 10’ wide).  Check them out at earthkindroses.tamu.edu.

Here are the AgriLife rules of thumb to succeed with roses.

Remember, a rose by any other name is still the same.  Enjoy!