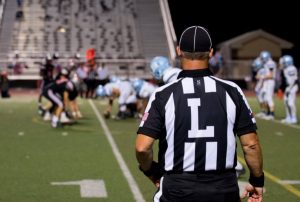 West jumped out to a 7-0 lead with five minutes to play in the first quarter, but Marcus answered with two scores, a 44-yard pass to Dallas Dudley from Garrett Nussmeier and a 5-yard run from Gabe Espinoza.

Early in the second quarter, Walker Wells rushed for a 3-yard score and Nussmeier hit J. Michael Sturdivant on a 2-point conversion to make it 22-7.

The two teams traded field goals before the half came to an end, including a 24-yard boot from John Wegendt.

Marcus made it 32-10 in the third quarter when Nussmeier hit Connor Vaughn on a 20-yard touchdown pass.

Nussmeier then connected with Sturdivant on a 59-yard score, and just before the end of the third quarter, Tyler Gainey scored on a 3-yard run, as Marcus led 46-10.

West scored two touchdowns in the fourth quarter, but could not complete a comeback.

The Jags appeared to find their rhythm on Friday night, soundly defeating Plano East to pick up their first district win.

Nick Evers hit Parker Clark on a 19-yard touchdown pass to get things going for the Jaguars, and after forcing an East punt, Evers hooked up with Cade Edlein on a 38-yard pass to make it 14-0 Flower Mound.

Evers connected with Clark on touchdown passes of 10 and 70 yards to make it 35-7 Flower Mound before East scored a second touchdown late, and it was 35-14 at halftime.

Flower Mound poured it on in the third quarter, scoring 28 unanswered points including 2-yard and 17-yard touchdown runs from Peyton Porter, and a big time special teams play, when Bentley Strey recovered a blocked punt in the end zone for the Jaguars.

Allen proved too much for the Wildcats on Friday night, winning 56-38 in a battle of the top two teams in district 5-6A.

Allen scored 21 unanswered points a second time to make it 42-10 Eagles, before Guyer scored on a 1-yard run from Stowers to make it 42-17 at the break.

Guyer cut the deficit to 18 to start the second half on a 1-yard run from Phillips and recovered a fumble on the ensuing kickoff to give the ball back to the Wildcats.

Phillips then scored on a 3-yard run to make it an 11-point game, but Allen came back with another touchdown to put the game at 49-31 with 3:40 to go in the third.

Allen scored again to make it 56-31, before Stowers scored on a 9-yard run but Guyer could not mount a comeback.

Tye Strickland rushed for 182 yards and 3 touchdowns, as Liberty Christian (1-6, 1-4) picked up its first victory of the season on Friday, which was senior night for the Warriors.

Liberty jumped out early, driving 80 yards and scoring on a 1-yard touchdown pass to Strickland to make it 7-0 with 6:41 left in the first quarter.

Liberty extended its lead to 14-0 in the second quarter on a 5-yard run from Strickland, and that was the score at halftime.

The Warriors took a 21-0 lead on a second 5-yard run from Strickland, but Bishop Lynch answered with a touchdown runs on two straight drives to cut the deficit to seven.

Liberty came right back, however, and scored on a 4-yard run from Aden Carpenter to make it 28-14 Warriors, and following a Lynch punt, Strickland scored again on a 1-yard run.

Argyle cruised in their bi-district game with North Dallas on Thursday night at Eagle Stadium, and now awaits the winner of the Fort Worth Benbrook/Stephenville game to be played Friday night.

CJ Rogers then connected with Hayden Stewart on a 35-yard touchdown pass to make it 14-0 Argyle, and Braden Baker gave the Eagles a three-touchdown lead on a 5-yard run with 7:16 remaining in the opening quarter.

Rogers then hit Cash Walker on a 41-yard touchdown pass and Knox Scoggins scored on a 3-yard run, and the Eagles led 35-0 after the first quarter.

Ethan Depiro took over at quarterback in the second quarter, driving 51-yards and scoring on an 18-yard pass to Baylor Bowen.

Special teams came up big early in the second, as well, as Lee Sutton returned a punt 71 yards for a touchdown to give the Eagles a 49-0 lead with 9:47 left to play in the half.

Peyton Shoemake tacked on a 17-yard touchdown run for the Eagles, and scored again on a 12-yard run following a fumble on North Dallas’ ensuing drive.

The Bulldogs then fumbled on the kickoff return to give the ball back to Argyle, and five plays later, Shoemake scored on a 4-yard run to make it 70-0 in favor of Argyle.

Drew Snakenberg came in at quarterback in the third quarter and completed a 14-yard touchdown pass to Gannon Pels to make it 79-0 Argyle, breaking a school record for the most points scored in a game.

The 4A Division I Region II bi-district champions advance to the area round and will face Stephenville (6-5) next Thursday, Nov. 19, at 7 p.m. at Globe Life Park in Arlington.