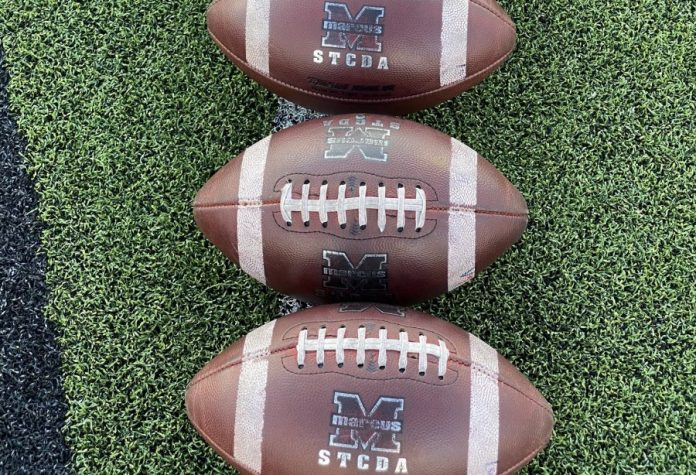 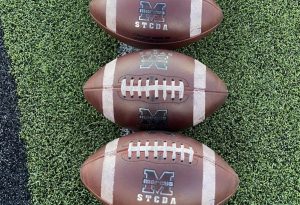 The Marauders continued their winning ways on Friday night, defeating Coppell by a score of 38-24.

It was Coppell that jumped out to a 3-0 lead, but Marcus (6-0, 3-0) answered with a 95-yard drive on the ensuing series that culminated in a 34-yard touchdown pass to Tyler Schott from Garrett Nussmeier.

Nussmeier then hooked up with J. Michael Sturdivan on an 18-yard pass to make it 14-3, and John Wegendt kicked a 19-yard field goal to make it 17-3 Marcus at the half.

Marcus extended its lead to 21 on a 7-yard pass from Nussmeier to Dallas Dudley, but Coppell answered with a touchdown of its own to make it 24-10 heading into the fourth quarter.

Marcus took a 31-10 lead on a 9-yard pass from Nussmeier to Connor Vaughn, and following a Coppell touchdown, Gabe Espinoza scored on a 2-yard run to make it 38-17 Marauders with 6:10 left in the game.

Nussmeier finished the game with 433 yards passing and 4 touchdowns.

The Jaguars struggles continued on Friday night, as they fell to Lewisville by a score of 51-21.

After getting down 7-0 in the first quarter, the Jaguars (2-4, 0-3) recovered a Lewisville fumble and drove 35 yards, scoring on a 1-yard run from Peyton Porter.

In the third quarter, Porter scored on another 1-yard run to make it 37-14 Lewisville.

The Farmers scored twice more to lead by 37 points, before Nick Evers hit Walker Mulkey on a 13-yard touchdown pass to make it 51-21 early in the fourth.

Flower Mound will travel to Plano at 7 p.m. on Nov. 13 to take on Plano East at Kimbrough Stadium.

In the first matchup between Guyer and Braswell, Guyer emerged victorious on Friday night.

Following a scoreless first quarter, Deuce Harmon returned an interception 35-yards for a touchdown to make it 7-0 Wildcats early in the second quarter.

Three minutes later, Guyer (5-1, 3-0) drove 76 yards and scored on a 1-yard run from quarterback Eli Stowers to make it 14-0, which is where it remained until halftime.

The Guyer quarterback then connected with Bryson Riggs on a 59-yard touchdown pass to make it 35-0 Guyer at the end of the third quarter.

CJ Rogers connected with Cole Kirkpatrick on a 28-yard touchdown pass to get things started for the Eagles, and Argyle (10-0, 6-0) led 7-0 at the end of one.

In the second quarter, Rogers hit Cash Walker on a 14-yard touchdown pass, and Ethan Gonzalez had a 25-yard fumble return for a touchdown, as Argyle led 21-7 at halftime.

This marks the 11th win out of 11 matchups between the two teams. Argyle’s regular season wining streak is now at 57 games.