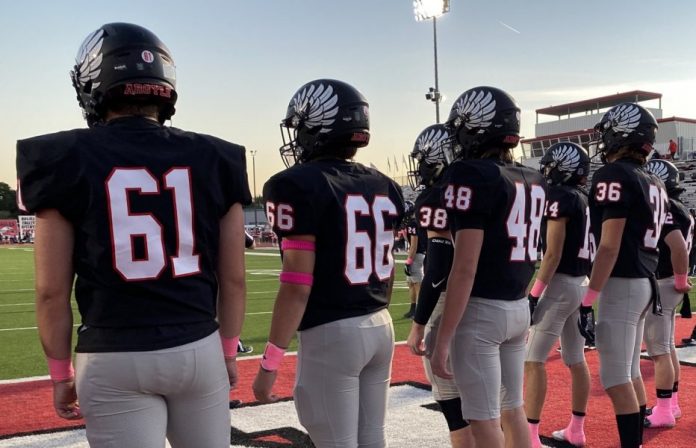 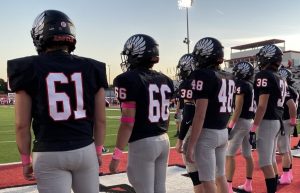 Tito Byce got things going for the Eagles early in the first quarter on a 7-yard run, and Braden Baker made it 14-0 on a 1-yard run.

Less than two minutes into the second quarter, Rogers threw a 21-yard touchdown pass to Cole Kirkpatrick and Knox Scoggins scored on a 4-yard run to make it 49-0 at the break.

Jett Copeland came in at quarterback in the second half, and threw touchdown passes to Ethan Gonzalez, Riley Page and Wayne Pritts to take a 70-7 lead with 6:14 to play in the third quarter.

Peyton Shoemake scored once more on a 1-yard run to close things out for the Eagles.

Liberty Christian (0-4, 0-2) continued to struggle on Friday night, losing to Midland Christian in its second game in district by a score of 55-21.

Daniel Greek gave the Warriors an early lead on an 18-yard touchdown run in the first, but Midland Christian answered with five straight touchdowns to make it 34-7 at the half.

Tye Strickland broke a 22-yard run to score for Liberty to cut the deficit to 20 points, but Midland scored two touchdowns to make it 48-14 in the third.

Daniel Greek completed a 1-yard pass from Nathan Greek to make it 48-21 with 5:57 left to play in the fourth.

Liberty Christian will play Prestonwood Christian at 7 p.m. on Oct. 23 in Plano.

In a game that saw multiple lead changes, Coram Deo (1-2, 0-1) came up a bit short, losing to Grapevine Faith Christian Academy by a score of 45-31.

It was back and forth early on, as Faith jumped out to a 3-0 lead, before Peyton Inderlied connected with Zachary Ledbetter on a 60-yard touchdown pass to make it 7-3 Lions.

Faith Christian answered with a touchdown of its own to regain the lead, before Inderlied hit Aidan Saucedo on a 34-yard pass to make it 14-10 Coram Deo.

Faith scored again, however, and took a 17-14 lead, before Saucedo booted a 32-yard field goal to tie it up at 17 at halftime.

Faith retook the lead with 2:41 to play in the third quarter, but Coram Deo came right back less than 20 seconds later when Inderlied and Ledbetter hooked up on a 43-yard touchdown to make it 24-24.

The Lions came back and made it a 7-point game when Inderlied hit Jack Herrington on a 17-yard touchdown pass, but Faith Christian scored twice more to put the game out of reach.