Something to Muench on: In a word, priceless!

“You’ll need to dress up for this tonight.”  These were the only instructions my son Allen-Michael gave to me the afternoon of our “fancy dinner.”  The kids had all signed an anniversary card and given it to us a few days before that conversation, inside the card was written the promise they would make Tom and me a “fancy dinner.”

I agreed with a smile but in my mind I was thinking…they are making us dinner, it’s going to be after a long day of work and our usual six mile hike…putting on a dress would be the furthest thing from my mind, especially now that we’re all so used to casual quarantine attire.

But we complied, and it was well worth it.  Had I shown up for fancy dinner in my usual tank top and shorts I would have felt totally underdressed in our backyard for this occasion.

When we arrived in the foyer (dressed in our best), our waiter (17-year-old son Maddux) greeted us in his (band) tuxedo and with a French accent and Sharpie mustache, he invited us to step out the front door where he then escorted Tom and me through the garage to the service door that leads to our patio (this was so we would not see what was going on with the rest of the kids in the kitchen).  Maddux was courteous and in character all night long, playing the part to a tee…just like when he was a little boy and performed at Studio B.

After getting us seated at a linen covered table with full china service (borrowed from my mom…I haven’t seen my china set since it was professionally packed in the mid-90s when we moved from Wisconsin to California…it’s been in a box for two decades!), Maddux poured our waters and disappeared so we could settle in and peruse the three-course menu they were going to produce for us.

Did I mention the music?  And the fire in the fireplace?  The atmosphere was lovely, totally romantic!  It seemed the kids had thought of everything. 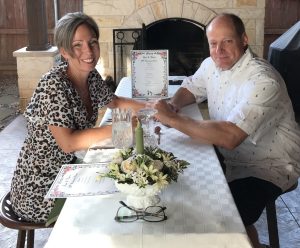 A few minutes later Maddux returned with a chilled bottle of our favorite chardonnay (We learned hours later it took all four kids to figure out how to get the cork out…not even our 26 and 22-year-olds knew how to uncork wine!) along with a small packet of index cards for Tom and me.  On each were handwritten questions we were supposed to answer over our dinner.  The topics ran the gamut from “When was the first time you heard me fart?” to “When were you most worried about me?” This activity evoked deep and meaningful conversation, and more than a few laughs!

Looking back, I think the questions were the best part of the entire evening.  The kids did a terrific job with the ambience (Mia was the “official photographer,” Brigham and Allen-Michael did all of the cooking), the food was delicious, and at the end of the meal Maddux ushered us onto the dance floor for our wedding song (Elvis’s classic “I Can’t Help Falling in Love with You”).

Tom and I have been married 28 years.  We’ve seen a lot of ups and downs…we’ve had pregnancy challenges, been bankrupt, had to support my oldest son through an addiction (he is now 10 years sober which is a blessing I never once dreamed possible), we’ve moved over a dozen times…and two years ago Tom left corporate America to open a travel franchise in Flower Mound.  Marriage can be hard, it can be really, really hard…but the evening reminded both him and me about all of the dividends that come with working together even in the most difficult of times.

I don’t know what’s ahead for us, but I do know we’ll face it together.  And with our extremely thoughtful, cooperative now-almost-grown kids.