A report presented to Denton County Commissioners Court on Tuesday outlined plans to add a bronze sculpture, granite memorial and kiosks to the Confederate monument outside the Courthouse-on-the-Square. The plans follow the recommendations of the Denton County Confederate Memorial Advisory Committee.

The committee, formed in November 2017, proposed adding context about slavery to the Confederate Memorial after unanimously agreeing the memorial should stay on the Courthouse-on-the-Square grounds, according to a news release from the county.

The report suggested forming a new committee with appointments by each member of the court. The new committee will be tasked with soliciting a request for qualifications for artists across the nation, reviewing responses and narrowing to a handful of finalists, receiving tabletop renderings of proposed selections, seeking public input in the artist selection, drafting an inscription for the granite piece and making a recommendation to Commissioners Court, according to the news release. 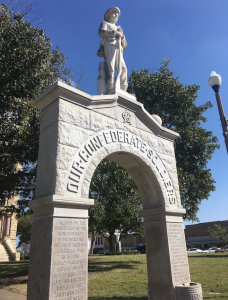 In the past two decades, Denton County has spent more than $475,000 on several projects centered on local African American history, including establishing the African American Museum, restoring the Woods House, cleaning up St. John’s Cemetery and dedicating historical markers for churches, buildings, parks and the first Denton County Historical Commission Individual marker in honor of Frederick Douglas Moore, according to the news release.

The Office of History & Culture has collected an estimated 1,300 images depicting African American families who served as landowners, business leaders and educators. It also established the “White Lilacs” tour to go along with Carolyn Meyer’s book published locally in 1993. An estimated 1,700 students have traveled to Denton since 2015 to visit the Denton County Historical Park and Quakertown Park. The book, geared toward middle school students, gives a fictional account of the Quakertown experience.

During Black History Month in February, around Juneteenth and throughout the year, Denton County provides exhibits, lectures, programs and special tours specifically designed to share the rich African American heritage across the county.

The Office of History & Culture has identified eight African American cemeteries in Denton County. Since 2016, the county has cleaned and maintained the St. John’s Cemetery near Pilot Point for a total cost of $56,375. The county is also in the process of doing title searches on three abandoned cemeteries. The remaining cemeteries are active and maintained either by cemetery associations or are on private property.