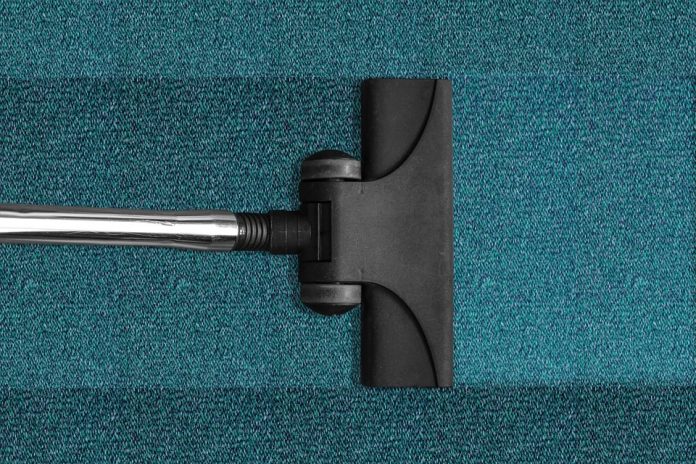 This past year, especially this summer, my carpeting was under siege from a thorough tracking of soil, mulched up leaves, plain old dirt, several contributions from the cats and just every day goo in general.  We moved a table to retrieve one of the cat’s toys and I gasped out loud.  There was a black streak in front of the couch and another right where my husband rests his feet.  It was disgusting and embarrassing.  So if I had any reservations about getting the rugs cleaned this revelation convinced me it was more than necessary.  The cleaner guys explained that they would do the best they could to remove the stain but it was in part due to worn out carpet nap so I shouldn’t be so hard on myself for having oily feet.

They were in and out in just a few hours and after attacking the terrible sullied areas they treated all the surfaces with a stain resistant coating.  This was supposed to create a barrier from future grime.  I was surprised at how much furniture they moved, but relieved that they had.  The process turned out to be like the Discovery Channel, unearthing things that had been missing for months.  The felines had amassed a stockpile of kitty toys in some pretty amazing places and the grandchildren had hidden treasures in clever nooks and crannies.  (Or maybe it was the other way around.)  A stuffed Christmas mouse, who was perched on the couch during the holiday season, came bouncing out from under the sofa.  It’s okay, he wasn’t real.  And a square black thing that appeared to be a foot off of something black (duh) was probably once responsible for this black thing not being lopsided.  (Never did figure that one out.)  And pieces from the kitchen play set could be found everywhere.  My darling little imps are the ultimate pack rats!  I no longer wondered why the kitchen set was running short on parts!

The fellas instructed us to keep the ceiling fans on high for at least eight hours and the thermostat cranked down to 72.  OMG, that’s cold even when it’s 100 degrees outside.  My husband and I spent some time shivering while we contemplated donning parkas.  We fudged a little and pushed the cold setting up a couple of notches while seeking a long sleeved anything in our closets.  It took until the following afternoon before the carpet was completely dry.  Didn’t really matter since we stayed mostly in the rooms that had tile.  We just got creative as to where to spend our time.  Believe me, squishing on soggy rugs is not a pleasant feeling, oily feet or not.

I was bragging to my son and daughter-in-law as to how proud I was of my freshly steamed flooring.  Not to be outdone, my son said, “Yeah, we had ours done last month.”  It had been some time since they’d entertained Stanley Steemer and Brad, while describing the great feeling the process awarded him, then shook his head sadly.  Looking for some motherly consolation he was almost pleading, “Mom, it wasn’t 45 minutes later, ‘I’m sayin’ ‘less than an hour,’ and Gabby (his 3-year-old) intentionally peed on the carpet.  I couldn’t believe it, Mom!!!”  He kept shaking his head.

I tried not to, well, I sorta tried not to laugh.  The curse, the curse was coming true again!  I explained to my frustrated offspring that when he was about 3, I put him down for a nap, a nap he did not want to take.  He was extremely angry with me and wouldn’t stay in bed.  I went to check on him because his room had become eerily quiet. When I peeked around the corner I found him standing right beside his bed while he casually wet on the carpet.  I was certain I had spawned Rosemary’s Baby.  While he’s usually entertained by the stories I tell about him from his childhood, he failed to find much humor in this one.

Not even trying to comfort him I simply explained that he had just begun to learn the true meaning of the words: RUG RATS!