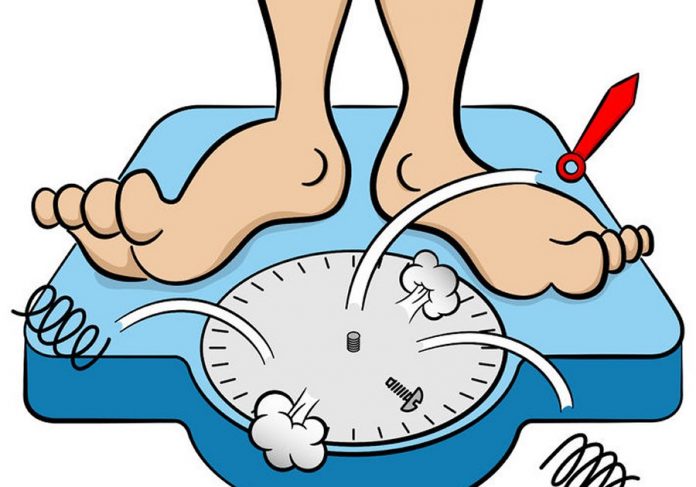 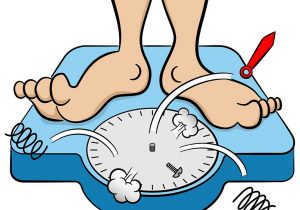 Now remember this is only one woman’s opinion but also remember I wouldn’t steer you wrong.  My saga begins right after the holidays and the demise of the bathroom scale.  We tried reviving it by feeding it new batteries.  But, alas, while this brightened the read out, the numbers it displayed were off by about twenty pounds…twenty pounds that hadn’t been there before Thanksgiving and Christmas.  Actually, Halloween probably contributed to the big, fat, liar as well.

My husband tried, as gently as he could, to convince me that the scale was not broken, but rather that I had broken all the rules of eating in moderation.  That really hurt!  But it was all too obvious as every single one of the zippers and buttons on my blue jeans became totally uncooperative.  The portly rolls of skin on my back, and all my appendages, in general, just blew up.  I quit looking in the mirror except the ones in the stores where I stood while trying on about anything in a much larger size.

This was so disheartening as I’d never had any weight problem to speak of in the past.  I’d always controlled my over indulging by using a wedding or a vacation or summer for that matter, as incentive to stay fit.  And it always worked…until now.

My son had gained quite a bit of weight himself and began following a low carb Keto diet. It certainly worked for him as he lost 40 pounds in a few months.  He looked great and seemed to be able to eat many of his favorite foods.  Of course, there were things I didn’t know about his miracle diet.  For all I knew he was starving himself to death.  So I tried it.  It might have worked if I hadn’t been such a cheater, especially at night when I watched TV.  I blamed my cravings on the commercials that hawked all things ice cream and carbo laden fast foods and snacks.  I was defenseless and weak.  So that attempt at getting things back in control failed miserably.

If you watch enough TV you’ll be exposed to a litany of diets that all sound just right for you.  Now I won’t mention any names here, I’ll just say that the one that seemed to be the least hassle, the best bang for your buck and the one that required no exercise got my attention right away.  So I signed up for all these yummy chocolate shakes which would burn calories in the first week.  They were awful and I had to struggle to get them down.  I was also introduced to the rule about eating 4 servings of vegetables every day, supplemented by their prepackaged food.  Each day you were required to drink a minimum of 64 ounces of water (or some sugar free substitute; coffee doesn’t count).  I normally do consume a lot of liquid but not this much.  If you’re going shopping you’d better know where all the rest rooms are located.  Eating six times a day is part of the deal and that first week included six of the worst meals/snacks I’ve ever eaten.  This was to jump start your metabolism but I really think the company is run by a bunch of sadists.

I called the customer support number to get some answers about some guidelines and also to vent.  I asked, “About how many pounds, on average, does a dieter usually lose the first week?”  The rep said what I’d expected her to say, “It varies on the individual, but usually anywhere from 3 to 5 pounds.”  I almost exploded, but kept my cool.  “Oh, really, I haven’t lost an ounce.”  I guess what ruffled my feathers so much was I hadn’t deviated from the plan at all and I was not being rewarded for my tenacity.

“Well, you really aren’t strictly adhering to the plan when it comes to your veggies.”  OMG, now it’s dawning on me that I’m being tracked.  My face turned as red as a beet! (Beets are on the veggie list so that was okay.)  The app I loaded per the instructions that came with the first delivery of meals was wired right in to her computer.  I thought it was just for my own personal use to watch my intake.  I realized its merit (I guess) but I did not appreciate feeling like “big brother” was watching.  And I also thought I should have been advised of the invasion of privacy.   I guess I’m not too miffed since I continue to use the app and have called customer service several times.  You are encouraged to do this and they’re on call from 7 a.m. to midnight.

There’s another piece to this system…you get to eat some of your own food, but that means buying special stuff in the grocery store which you then have to carefully measure. I mean, how do you measure 2 ounces of chicken?  I’ll tell you how.  You go to Bed, Bath and Beyond and spend $25 for a digital food scale.  What really gets me is all these categories associated with the meals.  Flex meals consist of SmartCarbs and PowerFuels, which are listed at length.  These are, of course, separate from the every single day 4 times a day ½ cups of veggies. The so called “free food” aka Unlimited Extras aren’t, because they, too, have to be measured and can only be worth 10 to 35 calories.  And did I mention you’re expected to eat every 2 to 3 hours?  It’s exhausting!

Much of my free time has been spent cooking vegetables. Finally one of the customer reps told me I could drink 8 ounces of low sodium V8 per day and meet 2 of my 4 servings of veggies.  Another rep told me that now that I was through the first week (even though I hadn’t lost an ounce) I was not to worry.  The next stage allowed for 1200 calories a day and the food was much better.  Each time I called, the rules were different yet somehow they explained how they were the same.  All I really wanted to know was what was I doing wrong that I wasn’t losing any weight.  That wasn’t entirely true…I did lose 2 pounds over the course of two weeks and gained it back.  Go figure.

I’m in the middle of my 3rd week, past the date when you can return food for $20 postage and the cost of packaging the frozen stuff in dry ice.  So I’m pretty committed.  The last call I made said I shouldn’t carve 1200 calories a day in stone.  That’s just a reference point.  The goal is really 1200 to 1300 and has to do with how many pounds you want to lose not how much you weigh.  Now how in the hell was I supposed to know that?  I had watched a bunch of videos on YouTube and researched the comment pages (both pro and con) that people had sent in…so much had been omitted.  I had no idea I’d be taking a course in “Dieting 101.”

Remember, there was no need to exercise, yet the app and the booklet I follow both have a place to log “daily activity” and the reps ask about that.  They tell me 30 minutes of house cleaning a day will fulfill that requirement.  I told them house work was not that fulfilling for me.

I’m certain I’ll never end up looking like Marie Osmond (my bad) but at least I won’t have “weighted” until another Thanksgiving to try!