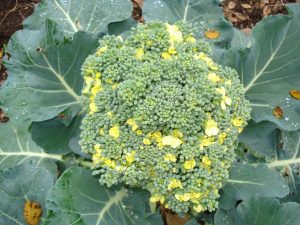 President George Bush, Sr., made it clear to America that he, unlike the ancient Romans, refused to eat broccoli (brassica oleracea italic), even if its bud-stalks came slathered in Ranch Dressing.

For some reason lost in history, Romans who followed their conquering army to today’s England did not take broccoli seeds along.  What a culinary oversight.  The dark green plant waited more than half-a-millennium to make its English language world debut in the early 1700s.  From there it traveled “across the Pond” to the American colonies.

Today, broccoli seedlings we buy in those cute little 6-9 packs flourish in north central Texas between now and late December’s killer freezes.  For the curious, the seeds were planted and germinated between early December and the end of January.  This popular crispy raw green likes cool weather and won’t complain about an occasional nip from Jack Frost.  Texans who just can’t get enough of the stuff plant a fall crop.

The baby plants need a sunny spot.  Broccoli can manage in partial shade, but expect slow growth.  They like six- to eight- hours of full sun daily; and, don’t skimp on the elbow room.

Plant broccoli starts 18-inches apart and at least 24-inches between rows.  For the arithmetically-impaired, that’s a foot and-a-half between plants and two-feet between rows.  The mature vegetables will use every inch of that space.

The stem and leaves undergo explosive growth, then a small green flower-head emerges at the center of the plant.  The flower increases in size until it looks like the luscious broccoli heads in the grocery store produce department.  Let the flower head grow until its clumped-buds just barely begin to spread apart.  Be forewarned, it is hard to resist harvesting before that stage.  Use a sharp knife to cut the flower off at an angle so water slides off the remaining stump.

After you remove that first delicious flower head from the plant, smaller heads will grow from its axils.

“But this isn’t an auto-repair article,” you say.  No, in horticulture, a plant’s “axil” is the upper angle between its main stem and the smaller stalk from which a leaf grows.  Picture it like this: stand on your head then spread your arms –pretending to be a plant– your armpits would be your axils.

Harvest the smaller broccoli heads right up until a hard freeze kills the plant.  Spring-planted broccoli will produce flower heads into the summer heat, but the flavor turns bitter and the head shape deteriorates as the mercury kisses the century mark.

The tender, cool-weather vegetable is a tastebud treat.  Try it cooked.  Just steam the fresh heads for five-minutes, until they turn gorgeous green, then add a bit of melted butter, a sprinkle of salt, and serve.

President Bush, Sr., has no idea something so green can be so delicious.

Put dead plants in the compost heap.  Rotate your crop location every couple of years, to prevent build up of unwelcome microbial soil visitors. Remember broccoli plants are living things that thrive on food (i.e. fertilizer) and water year round.