LETTER: Edmondson calls on Gelbman to withdraw from commissioner’s race 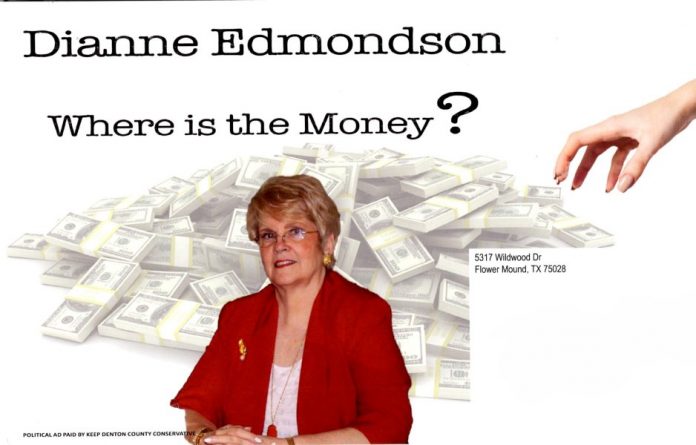 I am both shocked and disgusted with the recent mailing and false accusations by the PAC entitled Keep Denton County Conservative. I believe it is clear Itamar Gelbman and Gale David created, at the last minute, a PAC to deceive voters in the upcoming March Primary.

Not only are statements in the mailer false, the truth is easily available to the public via the FEC and TEC websites. My testimony for a senate bill is public record.

I am taking decisive and immediate action against Gelbman and David. A formal complaint to the Texas Elections Commission will be filed as soon as possible.

Meanwhile, because those proceedings take months and a civil remedy likely will not occur until after the March 6 Primary election, I am calling on Mr. Gelbman to take his lies and withdraw from this commissioner election.

I will also file a criminal complaint against Gelbman and David.

Accusation: Numerous Citations against the party by the Federal Election Commission (FEC)

FACT:  The FEC website lists NO citations or fines to the Denton County party during those times ALL 14 years.

FACT: The Party hired a bookkeeper to complete these forms. No complaint has been filed and, over the 14 years of my chairmanship, I always attempted to follow the required reporting laws. I certainly did not hide donors. Gelbman and David provide no proof or example of hidden donors.

FACT: All party expenses were recorded as required to the best of my knowledge. No complaint has been filed with the FEC or TEC.

Accusation: Mismanage transfer and disclosure of $42,028.63.

FACT: During the last three months of my 14-years as chairman, the bookkeeper failed to transfer the appropriate and required percent of funds to the appropriate account. This was her responsibility. Each of these months, I did ask her if this task was completed and she told me it was. A formerly trusted employee lied to me. In any case, the money was not lost, and the error was corrected quickly. Gelbman and David’s assertion that I mismanaged the funds is false.

FACT: Of course, expenses increased over the 14-year period I was Chairman. This reflects the outstanding Republican growth in Denton County. In the 2004 Republican Primary, approximately 15,000 republicans cast a vote in the Presidential race. In 2016, that number increased to approximately 96,000. This accusation is laughable. Gelbman and David are trying to mislead you with the GOOD news of our Party’s growth!

FACT: Over the 14 years I was Chairman, I incurred many thousands of dollars of expenses related to that role, and then was reimbursed with proper paperwork filed. had put many of these on my husband’s credit card. There were many expenses for which I never sought reimbursement. I called the Texas Ethics Commission to confirm these expenses were reimbursable and I was told they were. Here is yet another attempt to mislead voters.

FACT: I am the former Director of the Republican National Committee for Life. The legislation I supported INCREASED patients’ rights and was supported by most of the Pro-Life groups. The legislation extended a family’s ability to transfer their loved one to another care facility– from the current 10-day period to 30-days– if a hospital wanted to end care. It was estimated this legislation would eliminate conflict in over 99-percent of cases. Gelbman and David’s attempt to imply I am not staunchly Pro-Life is absurd.

FACT: A quote about the budget from Jan. 10th published in the Denton Record Chronicle: “Edmondson said the Republican Party stuck with the same budget for 14 years. She also said she was able to help take her and her husband’s business through an economic downturn.  (I actually said that we stuck to our budget each year, but not that it was the same budget for 14 years.) Despite her previous experience with tight budgets, she said it’s important to leave the door open for spending when it’s necessary. ‘Let’s face it, good government isn’t about spending as little money as possible,’ she said. ‘We just have to be careful in what we do.’”

Accusation: You can’t trust Dianne Edmondson with your money.

FACT: This is a bald-faced lie by Gelbman and David.