The power of pecans 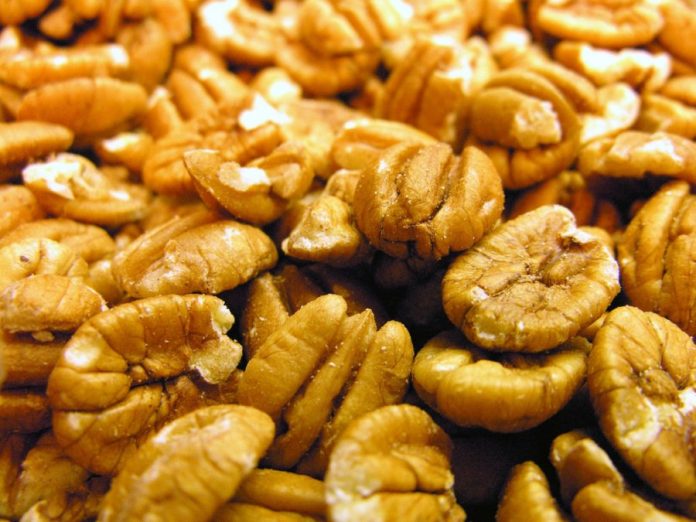 All over Texas this holiday season, meals will end with a pecan pie. I’m here to give you several wonderful reasons to indulge in that pie and offset any fretting over calories.

Pecans are nutritious! Studies have shown a handful of pecans every day may play a role in protecting the nervous system, and may delay the progression of age-related motor neuron degeneration.  In June 2004, the Journal of Agriculture and Food Chemistry reported on research that ranked pecans highest among all nuts and among the top category of foods to contain the highest antioxidant capacity. This means that pecans may decrease the risk of cancer, coronary heart disease, and neurological diseases such as Alzheimer’s.

A study published in The Journal of Nutrition in September 2001, found that pecans can double the cholesterol-lowering effectiveness of a traditional heart-healthy diet.  Packed with more than 19 vitamins and minerals – including vitamin A, vitamin E, folic acid, calcium, magnesium, phosphorus, potassium, several B vitamins and zinc, pecans are high in fiber, a high-quality source of protein and are naturally sodium-free. It’s starting to seem like eating pecan pie for breakfast isn’t such a reckless choice after all. 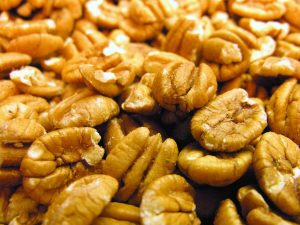 Pecans are local! The pecan is unique because it is the only major tree nut that is native to North America. Also, the native pecan itself is still important commercially, which is not true of other horticultural crops (most crops now are exclusively improved varieties not the native form.)  The pecan is considered one of the most valuable North American nut species today. The United States produces about 80 percent of the world’s pecans, which is between 300 and 400 million pounds annually. Texas usually ranks second nationally in pecan production with approximately 60 million pounds valued at over $87 million. Obviously, Texans consume a fair portion of pecan pie annually, but markets are growing in China, India and Germany. Pecans are grown in 231 of the state’s 254 counties by 3,600 producers, on almost 92,000 acres.

Pecans are tied to the rich cultural heritage of Texas! The pecan became our state tree in 1919 and the state health nut in 2001. Even today, native pecans are found growing wild along rivers. The tree is also widely used for shade and can be found on many courthouse lawns in Texas, including our own Denton County Courthouse-On-The-Square. The name pecan is from Algonquin origin meaning “nuts requiring a stone to crack.” Now days, the many different pronunciations of pecan can be a fun topic of conversation and study in regional differences. A final tip for the transplanted Texans, “puh-kahn” is typically used over “pee-can.” We certainly don’t want any mistranslations on that.

Buy your own piece of Texas at the Denton County Soil and Water Conservation District’s tree seedling sale. All proceeds benefit the “Cool Shade for Third Grade” program in Denton County schools in October which involves Master Gardeners and Master Naturalists delivering over 3,000 seedling trees to third graders. The kids also hear a short educational presentation about the importance and value of trees for water quality, windbreaks, soil protection, wildlife habitat and oxygen. The third graders take the trees home and have a first -hand experience of growing their own tree.  This year, the tree seedlings that are available for sale are Afghanistan pine, Italian stone pine and pinyon pine for $4.50 per 18-24 inch tall tree.  Also available are bare root pecans and aromatic sumac for $3. And there are one gallon potted trees for $9.50 which include bur oak, live oak, Mexican white oak, shumard oak, desert willow, Mexican plum and vitex.