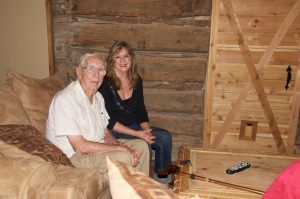 “I had always heard there was a log cabin on West Front Street,” said 102-year-old Mary George Sullivan in 2011 when she heard the house there was being remodeled and portions of the log cabin were revealed.

“I never saw it, because it was always covered up,” she said.

The house Sullivan was talking about had been owned by Tom Wingo, a foreman for the Texas and Pacific Railroad and Wallace Lynch bought the house from him in 1945.

At the time Lynch purchased it, Wingo told him there was a log cabin in the house. He said it was the old Denton County Courthouse moved from Alton to Argyle.  All these years the one-room log cabin had been covered up; first with boards, since it was at the front of the house, then with sheetrock after a room was added.

“We always knew a log cabin was there, because you could see the logs in a closet,” says Karyl Lynch Smith who grew up in the house. “Mother must have thought the cabin was well-built, because whenever a storm blew in she would say: ‘Let’s go to the log room’ and we did.”

After Lynch deeded the house to his daughter, Tami Lynch Peevey, her nephew, Matthew Smith, began remodeling it by removing the sheetrock and exposing the logs in a wall within her living room.

According to the book “History of Denton County” by Ed. F. Bates, when the Legislature of the State of Texas moved the Denton County Seat to Alton in 1850: “People interested in the new county seat met and built a hewed log courthouse, twenty feet by twenty, thirteen rounds high, covered it with two-foot boards held on by weighted poles; puncheon floors, board door, the judge’s stand in the west end, stick-and-mud chimney in the east end, and split-log benches.”

However, in 1857, when the people of Denton County voted to change the county seat to Denton: “this log courthouse, the temple of justice of Denton County, was cremated on a festive occasion. ‘Tom and Jerry’ [a mixed drink] was made and served,” and witnessed by a number of people listed in Mr. Bates book.

If the Alton courthouse burned down, where did Argyle’s log cabin on West Front Street come from and how old is it?  These are questions residents knowing about the log cabin want to know.

Lynn Sheffield Simmons is the founder and past president of the North Texas Book Festival Inc. She is also the founder of the Argyle Community Civic League, Inc, and the Argyle Senior Center. She is the author of 10 children’s books and two history books on Argyle. Five of her children’s books are on the accelerated reader list and her books can be purchased from her website www.ArgyleBooks.com.  Simmons may be reached at [email protected].