Pigeon racing: Not just for the birds 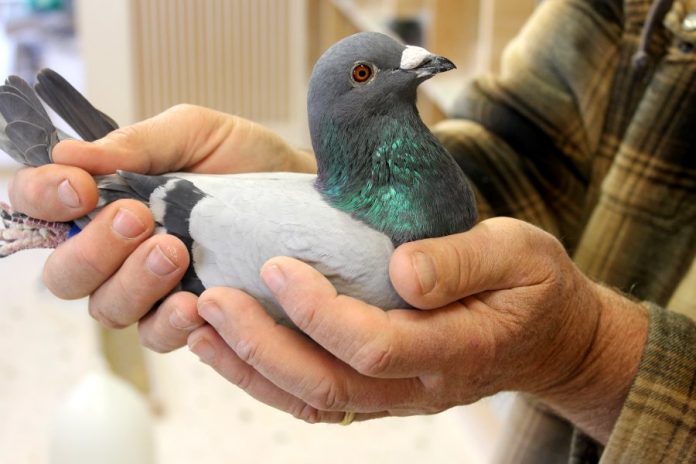 The eight-month-old came racing into her home near Krum, in west-central Denton County, after beating her wings on a 300-mile, seven-hour homeward journey that began in West Texas.

The homing pigeon was trained by Bob Stubbs, a pigeon trainer and aficionado who lives with his wife, Karen. Their property has a sophisticated, two-story loft where their pigeons live in comfort. The racers may be either females, called hens, or males, called cocks. The baby birds hatch from their eggs at the end of December and are banded within five-to-six days.

Stubbs, formerly of Argyle, is a member of a 17-member club named the Denton Invitational Racing Club. The members race their pigeons in races run by the North Texas Futurity. Before the members race their birds, they begin training them when they are only about four-to-five-weeks-old.

“First, I take them out of the loft and put them on the landing boards,” he explained. “Then, they learn how to use the trap-door for going in and out of the loft. By June or July [at six-to-seven-months-old], I release them at the end of the road and they begin routing or cruising the countryside for 20- to 30-minutes.”

Next, he increases the distances. First, he takes them away from the loft at a distance of from 5- to 10-miles away; then, from 15- to 20-miles away.

“I like teaching them,” said Stubbs. “The more confident they are, the more likely they are to win the races. Most pigeon trainers train their birds in the light of the flight direction they are going to come in the race. I don’t just take them to release points that are eastward or westward from the loft, I also take them a little north and south of the loft in case they must fight wind.”

In August, the training slows due to the hot weather.

“They can handle cold a lot better than heat,” said Stubbs.

In September’s cooler weather, pigeon trainers pick up the pace of training; they take the birds 25- to 70-miles from the loft “so they get used to it.” Then, they are released from a training trailer 100-miles away from home. The pigeons don’t always return home immediately; indeed, they may be missing in action for four or five days. 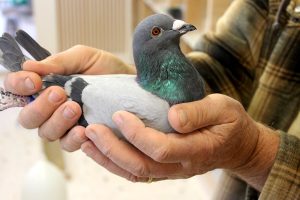 Before a race, Stubbs attaches special tags on the birds. The tags contain a computer chip with an electronic timer that is activated when the pigeons are released.

When the racing pigeons re-enter their loft, electronic readers below the landing boards at the entrance record the exact times of their arrivals. The electronic time readers are accurate to 1/100th-of –a-second.  The pigeons’ speeds are recorded in yards-per-minute and are compared to the speeds of the other racing club members’ pigeons. Then winners are declared.

On Saturday, Nov. 14, the couple entered 32 pigeons in three different races. The pigeons were passengers in a special trailer that picked up the Stubbs’ pigeons, along with others in the Krum area, and drove them to their release point in Seminole, Texas.

The driver released the pigeons from the trailer’s rear by pulling a lever.  The first set of 16 pigeons was released around 7:30 a.m. and the first three of those 16 arrived in Krum around 2 p.m.

This particular race was a young-bird race in which eight-month-old pigeons participated.

Certainly, the weather and wind are factors that affect racing pigeons’ times. At race time, the birds encountered cloudy weather, southwest winds at 5–10 mph and the temperature was 41°F.  The pigeons returned at the race’s end to their loft under cloudy conditions, SSW winds moving at 5–8 mph, and a temperature of 62°F.

“If the wind speed is less than 15-mph, it is not much of a factor in a race’s outcome,” said Stubbs. “However, if the wind speed is 15- to 20-mph, then it is a huge factor. Then they have to push south and fly in an arc to arrive home.”

Capturing first, second and third places in the Nov. 14 race were pigeons of Rick Mardis from Ponder. His loft is 294.040-miles from the starting point; the winning time was 1302.073 yards/minute. Pigeons trained by Stubbs placed sixth, seventh and eighth.

“If you race pigeons, you should strive to improve your times from season to season,” said Stubbs. “Every fall, the release points where the pigeons fly from changes. The release points [move] clockwise, so everyone stands on equal footing.”

Another way pigeon racers gain an equal footing is to participate in bond races.

“A bond race is one in which you choose your very best five racers,” explained Stubbs. “That way, no one can ‘stack the deck.’”

On the exterior of Stubbs’ two-story loft, lights are mounted above the landing boards, so if the birds arrive at night they can see their home.

Inside, the birds bask in light from a 30-foot skylight across the loft’s roofline and each bird has a little pen with access to an outdoor aviary. They also receive light from “blue moon” lights that encourage the birds to molt more and produce new feathers that enable the pigeons to race better.

Air temperature inside the loft is also important. Stubbs controls the ambient air temperature of the loft’s interior by opening and closing the holes of the entrances, the vents running along the loft’s bottom, as well as those running the length of its roof. When he opens the roof vent by pulling on a louver chain, air is drawn through the bottom vents. Additionally, the loft contains six heat lamps.

In the loft’s kitchen area, Stubbs prepares and stores two types of feed. The regular feed is loaded with safflower, corn and rice to provide the high-energy necessary for racing pigeons. The feed used for breeding birds also contains grains, but also includes peas to provide protein.

Stubbs promotes breeding between his highest-scoring males and his pedigreed females. He knows which birds are the best, because Karen maintains performance records on all their birds. Mating between a cock and hen does not occur immediately.

He places a cock in a box separated from a hen by dowels, so they can look at each other for 72-hours. Stubbs then removes the dowels so the birds can mate; then he moves the female and her eggs to a nesting box. The eggs hatch about 18- to- 19-days later.

The “old” birds race in a 10-week series that begins in March.

As the racing pigeons approach their loft home, Stubbs releases special birds called Chicos. These birds are called droppers, because they guide the racing pigeons to the loft. The Chicos are a cross between Casanovas and Cassinettes.

The couple both hail from Cottage Grove, Ore., where Bob first became enamored of pigeons as a boy.

“Because my father had kept some [pigeons] before, he had no objection to me doing so and he helped me,” said Stubbs. “We had fun.”

Anyone who is interested in racing pigeons may call Stubbs at 940-600-2958 to receive information.