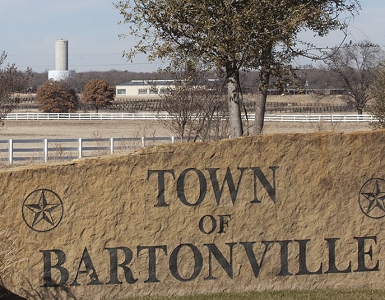 In response, a motion not to comply with the HOA deed restrictions—or start demolition on the tower– was filed by the CTWSC Board of Directors.

During the second week of November, an appeal was filed by CTWSC for an adjustment or a new trial to reconsider additional information in Denton County’s 442nd District Court. The appeal has a 90-day review timeline.

The October ruling came following a jury verdict on July 24 against the CTWSC—formerly named Bartonville Water Supply Corp. (BWSC)—which began construction on its 155-foot-tall storage facility back in August 2010.

The verdict against CTWSC was based on CTWSC’s failure to comply with the Covenants, Conditions and Restrictions (CCRs) of Saddlebrook Estates HOA (Home Owner’s Association).

“The HOA violation wasn’t brought up [in the lawsuit] until 2014,” said CTWSC General Manager Lloyd Hanson following the verdict. “The land [4.87-acres adjacent to a public utility easement for power lines] was bought in 2001 for water storage. We brought in water lines, dug wells, and distribution pumps used as part of the business and also for its elevation for a future water tower.”

The CTWSC contends that, as a public utility, the acreage should be exempt from the HOA deed restrictions. In addition, the Bartonville Town Council rezoned the land from residential usage to public/semi-public and granted both CUP and building permits allowing an elevated water tower.

“The water tower acreage can’t be called a ‘lot’ because it doesn’t meet the Saddlebrook HOA’s definition for what constitutes a ‘lot’ and it’s not even contiguous in the plat; isn’t even included in it,” said Hanson. “Plus, it’s not zoned as residential. It’s zoned as a public service area.”

The first lawsuit filed against the then-BWSC was by the Town of Bartonville in June 2011 as a zoning dispute, because construction was started without a valid town Conditional Use Permit (CUP). That lawsuit was settled in April 2014.

“She [Judge Haertling] has 90-days from the filing date to re-assess the verdict in light of the information included in the request,” said Hanson. “If she denies [the ruling and/or re-trial] request or lets the time lapse, then we’ll appeal to the Fort Worth 3rd Court of Appeals.”

Hanson added that the interest in seeing the tower being completed has grown.

“We respect the legal decision, but it’s not in the best interest of the town or its customers,” said Bartonville Mayor Bill Scherer following the October ruling. “It creates a problem for existing landowners who want to build larger homes … homes over 5,000-square-feet. And, it also means there’s an impact on any additional hydrants for new developments, including for the developer who recently bought the land from the Armeys.”

“Unless there are hydrants available to service those homes, the development won’t happen, because there will be no guarantee of fire protection or insurance available,” said Hanson.

Mayor Sue Tejml of Copper Canyon  and Jim Carter, president of the Board of Commissioners of Denton County Emergency Services District (ESD) No. 1 have contacted CTWSC about production of water-use issues and the need to have a delivery system to hydrants.

“With Argyle growth coming up and Denton coming south, plus a rezoning for Copper Canyon for parcels of only one-third-acre for an increase in the potential units to serve, the customers are using water in the storage tank meant for fire protection,” said Hanson.

He added that no additional hydrants will be added until enough pressure for fire protection requirements is settled.

The first lawsuit filed against the then-BWSC was by the Town of Bartonville in June 2011 as a zoning dispute, because construction on 4.7 acres within BWSC’s property was started without a valid town Conditional Use Permit (CUP) plus two votes against the tower by the Town Council. The council cited an ordinance that allows nothing higher than 35-feet can be built in the town.

Rather than continuing its attempts to conform to Bartonville’s ordinance codes surrounding its property, BWSC requested a legal determination exempting the public utility from oversight by the Town Council; which morphed the water tower from a zoning fight into an “eminent domain” jurisdiction question.

In a hearing on May 1, 2012, Denton County 393rd District Court Judge Douglas Robison ruled with BWSC that the provider was not under the jurisdiction of the town’s ordinances and the CUP was granted.

That summer, the town filed an appeal with the 4th District Court of Appeals in San Antonio (the local Fort Worth Appeals Court’s docket was full), which eventually heard a portion of the case in March 2013. It overturned the Denton district judge’s decision on the town’s zoning authority, but failed to address the CUP permit question.

On April 21, 2014, an agreement– following a series of closed meetings over the year following the appeals court ruling– was reached to put an end to the four-year legal battle between the now-renamed CTWSC utility and the town over construction of the tower.

According to the agreement, CTWSC would submit a new application to the town for a building permit and would make a one-time payment of up to $350,000 to reimburse the town for its legal fees and indemnify the town against all future claims and liabilities arising out of what had, by then, become two related lawsuits.

Back in December 2012, a group of Bartonville residents filed a private lawsuit in the 422nd District Court, which was then transferred to Robison’s 393rd District Court, to block the actual construction of the water tower.

The group questioned the need for an elevated storage tank, instead of lower and larger ground tanks such as in neighboring Southlake. The general building and specific use permits had already been approved for the ground storage and pumping facilities on the BWSC site. The group also objected to the aesthetics of the water tower, calling it an “eyesore” which would lower surrounding property values.

The resident group included Susan and Richard “Dick” Armey, former majority leader of the U.S. House of Representatives from Texas’ 26th District, and Renda and Rex Tillerson, Exxon’s CEO, through one of their Bartonville properties– the Bar RR Ranch. However, between March 2013 and April 2014, five of the seven couples—including the Tillersons—had dropped out of the lawsuit.

Going forward, the plaintiffs included Richard and Susan Armey– who own a 78-acre ranch adjacent to the water tower, Richard and Krystal Vera, Timothy and Shawn Landrum as trustees of the Landrum family trust and James and Shirley Ball.

After the Bartonville Town Council settled its own long-running battle over the tower in April 2014, Armey added the town to his lawsuit.

His petition had two causes of action — one for illegal contract zoning– after the town amended its relevant ordinance and the CUP and building permits were approved– as provided for in the town’s settlement agreement with the water supplier, plus a second for open meetings violations.

On May 16, 2014, Judge Doug Robison of the 393rd District Court in Denton, denied Armey’s motion to tear down the partially-built water tower

On Oct. 29, 2014, the Town Council approved Ordinance 569-14 amending No. 361-05 zoning from “RE-2” to “P/SP” (P/SP: a building, structure or complex of buildings that protect the health, safety, welfare and quality of life throughout the community). It also approved Ordinance  570-14 amending 361-05 to grant a CUP to allow an elevated water tank and related facilities.

Also amended was Item J of Ordinance 569-14 (from Ordinance 361-05) to provide Fire Flow system-wide upgrades to provide more extensive protection to all municipalities within the 10,875 total acres in the CTSWC service area.

The lawsuit jurisdiction was transferred on Feb. 2, 2015, from Robison’s 393rd District Court back to the 442nd District Court original 2012 filing court for a jury trial.

Originally set for April 2015, the trial was repeatedly delayed until July 20, with a verdict entered on July 24.