A gas station is one step closer to reality for the FM 2499 corridor in north Flower Mound.

The rezoning request for the 18.58-acre Hawks Hill development, a retail and professional office project, was unanimously recommended for approval by the Flower Mound Planning and Zoning Commission on Sept. 28 after having been tabled for two-weeks due to traffic impact concerns.

The property is located west of FM 2499 south of Waketon Rd., just north of the recently approved Highland Court residential project. The zoning request was to change the acreage from Agricultural (A) to Planned Development (PD-141) with Retail District-2 (R-2) and Office District (O).

The property is located within the town’s TIRZ (Tax Increment Reinvestment Zone) boundary, which is mostly on either side of FM 2499 from above Forest Vista up to FM 407, with a north extension west of Chinn Chapel.

Hawks Hill’s top one-third is projected to have approximately 30,000-square-feet of retail and restaurant dedicated usage, plus a 6,000-square-foot QuikTrip convenience store with gas pumps at the FM 2499/Waketon intersection opposite Win Kids Sports and Learning Center.

The bottom two-thirds of the development will be 99,200-square-feet of professional office space usage.

“The project has been in compliance with both the town’s Master Plan and SMARTGrowth since the first presentation in December 2014,” said consultant Kendra Stephenson representing the applicant, Hawk Ramsey and landowner Jeff Ramsey. 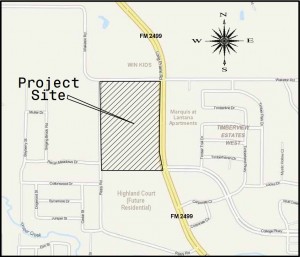 She added that to enhance the visual aesthetics, open-space areas will be scattered throughout the development, rather than in one “clump.” Also included will be a pedestrian linkage with a section of a town trail running along the north side of College Pkwy.

He presented the TIA (Traffic Impact Analysis), assessing the intersections and links in the Hawks Hill area, reflecting level-of-service (LOS) results, which are graded by “A” to “F” industry-standards; level “A” rated as being free-flow, up to level “F” rated as being traffic at over designed-capacity.

He pointed out that although FM 2499 is an exempt state roadway, after all of the planned road improvements in the area are completed, the LOS will operate at the acceptable level of “C” or better; a stable traffic flow, maintaining the speed limit.

Hotelling added that the Waketon/Rippy and Waketon/Jacob Lugo Drive intersections, both west-of and parallel-to FM 2499 are projected to be at level “C” or better.

Several residents came to the podium to share their concerns.

Cindy Spilberg said that in spite of the recent TIA report, she is concerned that Hawks Hill will increase traffic coming from the connection of FM 2499 to I-35E that isn’t included in the report.

Both Selena Macomber and Jim Engle said they were concerned about possible high-density residential usage for the remaining 13-15-acre parcel of land remaining for development west of Hawks Hill.

“The concept plan from October 2014 mentioned 192 possible multi-family residential units,” said Macomber. “The December 2014 plan doesn’t mention anything about development to the west side of Hawks Hill.”

Also of concern was the location of Jacob Lugo Dr., named to honor fallen Marine Lance Cpl. Jacob Lugo, set to meet the Win Kids driveway to the north. The current location would mean the removal of one of six specimen trees in the development.

Stephenson responded that relocating the north-south Lugo Drive would require cutting into the existing hill slope upon which the current house sits.

“The owner is very protective of the site and to preserve ‘the hill’ slope,” she said. “The buildings are situated so that we can avoid cutting into the slope and will not allow any retaining walls over eight-feet in height.”

Speaking in support of the project was Patsy Mazur, who said the FM 2499 extension is meant to be a commercial corridor.

“I understand that residents living on Rippy Road are worried about their property values,” she said. “In the past, they’ve tried to stop previous efforts– first with the Master Plan and now trying to use traffic plans. We need to get this done.”

Also in support of Hawks Hill was David Johnson who said: “The folks along Rippy Way isolated themselves when they opposed the extension of College Pkwy.”

The commissioners approved recommending Hawks Hill, with only Emily Strittmatter abstaining, after she recused herself prior to the discussion.

If the rezoning is approved by the Town Council on Monday, a separate Specific Use Permit (SUP) for gas sales to allow QuikTrip will also need to be approved by the council.