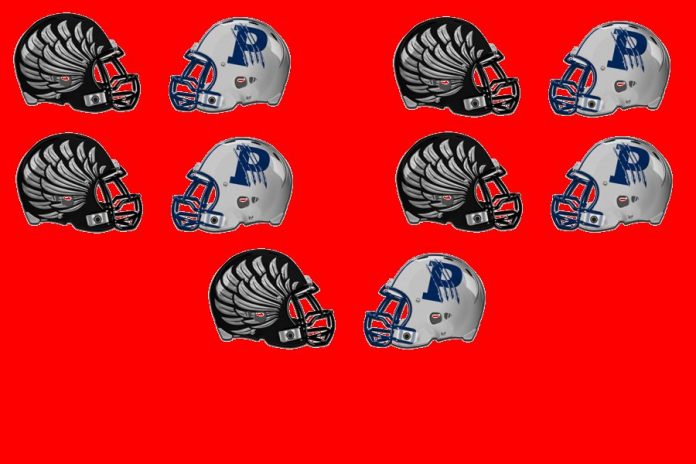 Check out photos from tonight’s game against Paris at http://t.co/yrLdXljHDr pic.twitter.com/Wqv3FDTi1p

The Argyle Eagles (4-1) finished off their non-district slate in close but comfortable fashion, beating the previously undefeated Paris Wildcats, 31-20.

After holding a very potent Wildcat offense that averaged over 55 points per game to a 3-and-out, Dillon Carter, who was getting the start at QB, led the offense down the field and Taylor Sweatt rumbled into the endzone for a quick 7-0 lead.

Paris responded quickly, with QB Quez Allen taking for 41 yards and a score to tie it, and then a fumble on the kickoff put the Wildcats in good field position. The Argyle defense held it together however, forcing a punt.

Both squads weren’t able to do much in the 2nd quarter thanks to great defensive play and countless penalties. The Eagles headed into the break with a 10-7 lead.

They opened the 3rd quarter immediately with a great kick return and Sweatt was able to break the scoring drought, finding the endzone from 8 yards out.

“We were making simple mistakes, and we just refocused and got back rolling.” said Sweatt, the senior tailback.

After a great defensive stand by the Eagles, Dane Ledford drove the offense the length of the field, with Drew Estrada capping it off with a 4 yard run off of a speed sweep.

Paris seemed to grab some momentum, with Allen finding Jalon Pipkins in the corner in the endzone for a short TD, but the Eagles responded again, with six straight runs by Sweatt, and he did the rest, finding the endzone again to make it 31-14.

Argyle has a bye next week, but will begin district play October 9th at home against Ranchview.