“Until about World War II synchronized swimming was called water ballet,” said board member and founding mother Amy Turner. In her spare time she is an R.N. at Texas Health Presbyterian Hospital Flower Mound.  “Synchro is a hybrid of deep water swimming, gymnastic strength and agility, and graceful performance set to music.”

The athletes keep their pace and place by hearing the music through underwater sound systems.  Check out the YouTube videos of the two Russian gold medal teams at the 2004 Athens Olympic Games.  As they say in the texting world, OMG!  Their performance will leave you gasping for breath.

Aspiring local Synchronicity members, Amy said, must qualify by successfully swimming one diving pool length doing the crawl stroke.  “That’s a challenge for kids younger than 10, but if they’re up to it, we’re up to it.”  Usually these children have prior swim team experience.

Synchronized swimming is the new kid in the summer Olympics pool.  Grouped with races, platform diving and water polo, this woman-dominated sport is fast paced, dramatic stuff.  The athletically unfit wouldn’t want to face one of these teams alone in 12 feet of water because Rule #1 is performers may not touch bottom, and to keep things honest, the action below the surface is filmed.

The Turner family became involved after their then-kindergartener, Katie, saw synchronized swimming on a television show.

“We checked out The Pirouettes,” said Amy.

“Our Katie was on a regular swim team, but she wasn’t happy until she could participate in synchro swimming.  She called it dancing in the water.”  That’s definitely an understatement.

After a couple of years, mother and daughter migrated to the new Denton County team that started in late 2013 closer to home.  On May 23rd Katie and her synchro duet partner Kennison Thomason competed at the 2015 USA Synchro Junior Olympics in North Carolina.

The Germans invented the sport in 1891, and sent a team to perform at the 1933 Chicago World Exhibition.  The demonstration was a hit, thereafter popularized in the U.S. during and after World War II by American championship swimmer Esther Williams.  In 1984 synchronized swimming joined the Olympic Games roster, and currently only teams and duos may compete.

An organization called USA Synchro sponsors annual college level championship meets which have so far been donated by teams from Ohio State University, Stanford University, and the University of The Incarnate Word.  There actually are a few scholarships for synchro swimmers.

“North Texas Synchronicity is lucky to have coach Stephanie Cardwell who was a college level synchro athlete in Alabama.”

The dark haired, lanky 26-year-old is in the Metroplex as a doctoral student at the University of Texas at Dallas.  Like Katie Turner she got the childhood yen to do synchronized swimming.  There wasn’t a hometown team so Stephanie’s mother went out and started one.  The effort paid college dividends.

The heartland of synchro swimming in the United States is California, the home of the Santa Clara Aquamaids, a pre-Olympic level organization. 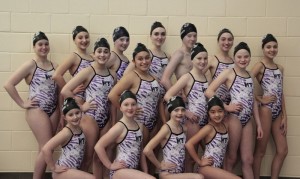 “Families interested in producing an Olympic swimmer arrange their lives and careers to move to the west coast town to join that team.  There are only 155 synchro clubs in the whole nation, and two of them are right here in the Dallas-Fort Worth area,” said Amy.

There used to be about seven local teams, but interest waned over the years.  North Texas Synchronicity started with five athletes, and two years later its rolls boast 15 energetic girls, and one boy who is recuperating from a competitive swimming injury.

“We plan to keep growing, and hope to spin off new teams around town once again.  It’s a terrific sport.”

The members of Synchronicity like the swimming and gymnastic challenges.  “And of course the girls like the glamorous bathing suits.  When we do a show or a competition they get to wear glittery waterproof makeup which is a real hit.”

Men swimmers like those on the Cirque du Soleil team in Las Vegas forego the floofy stuff thank you.

The aspiring sportsters who stick with it will learn hundreds of regular movements with names like scull, eggbeater, sailboat, flamingo, crane, knight, side fishtail, tub, layout, and lifting in which the team—which, remember, cannot touch bottom at any time–jettisons a gymnastic flyer high out of the water.

Women’s hair length is a sport regulation issue.  “When the girls start, we tell them to stop cutting their hair.”  The rules require hair under a cap or twisted into a tight bun on the crown of the head.

So how do the uncapped locks stay put during the action?  The one word answer is “knoxing.”  Team helpers saturate swimmers’ fixed hair with uncolored, unflavored gelatin, Knox brand of course.

“It’s warm goo when we paint it on the hair, but in the cool water, the stuff turns to jello, and the hair stays put.”  They have to stand under a hot shower at home to melt the gelatin out later.

Don’t even imagine bikini bathing suits, this isn’t beach volleyball.  Performance suits are specially designed, made with thigh to neck coverage, and very similar to figure skating costumes–minus the miniskirts and sleeves.

The costs, Amy said, are about the same as being in gymnastics or playing a land-based league sport.  Competition level team members practice three times a week, Tuesday, Thursday, and Saturday.  They have to qualify for Zone, Region, and Association meets.  The North Texas Synchronicity organizers hope to host an invitational meet.

“Westside Aquatic Center is the third largest pool in Texas, and it has the biggest audience stands, which make it a very attractive competition venue.”

High rise stadium seating fills one side of the natatorium, and low bleachers line the wall on the opposite side of the pools, which are, by the way impressively gigantic with a couple of movable walls.  Check them out at 1750 Duncan Road, off Highway 3040 (Round Grove Road) in Lewisville, (west of Vista Ridge Mall) right behind the Harmon 9th and 10th grade campus.

The 2014-2015 Synchronicity team has members from Marcus High School, Downing and Lamar middle schools, Flower Mound and Bridlewood elementary schools, and a private school for gymnastic students in Coppell.

If your little mermaid doesn’t want to swim laps, then put on a tee, shorts and flip flops and come check out the Synchronicity action.  If you have a backyard pool, you can hire the team for a synchronized swimming party in which the guests get the thrill of learning a few tricks together.  Get information and see videos of the action at www.NorthTexasSynchro.org.  The team also has a Facebook page at North Texas Synchronicity.