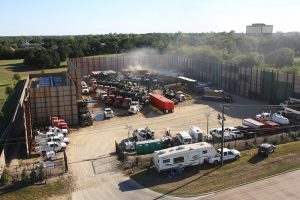 The so-called “Denton fracking bill” is headed to Gov. Greg Abbott’s desk. The Senate on Monday approvedHouse Bill 40, which would pre-empt local efforts to regulate a wide variety of oil and gas activities and has stirred concerns in Flower Mound and other towns that have sought to blunt the effects of drilling close to homes, schools and businesses.

We asked the six candidates running for Flower Mound Town Council on May 9 the following question last week: In the face of the Texas Legislature’s likely passage of a bill that will void Flower Mound’s protective oil and gas drilling regulations, what is your proposal for continuing to protect Flower Mound from gas drilling encroaching on schools, homes and businesses in our community? Here are their responses:

This is a difficult question to answer today since the anticipated bill (HB 40) has not been passed by the Legislature and signed by the Governor. However if HB 40 is approved in its current form, the legislation would remove our Town’s ability to issue drilling permits by expressly preempting the regulation of oil and gas operations by municipalities. Since I am a current Flower Mound Councilmember, I can only express my personal thoughts, and not represent our Town Council. I would propose that our Town Attorney and Town staff develop an action plan to develop new or modify existing Town regulations that would allow the reasonable mitigation and/or reduction of drilling impacts. These regulations would comply with the bill’s “except that a municipality is authorized to enact,  amend, or enforce an ordinance or other measure that regulates only surface activity that is incident to an oil and gas operation, is commercially reasonable, does not effectively prohibit an oil and gas operation, and is not otherwise preempted by state or federal  law” provision. The challenge will be to see what measures satisfy our Town’s ability to regulate “surface activity” yet do not contradict the anticipated state law and the general concept of “commercially reasonable.” I hope that my current experience on Town Council and two years of service on our Town’s Oil and Gas Board of Appeals will allow me to contribute to a reasonable solution to this major loss of our Home Rule. This will be a challenge for all municipalities in Texas, and hopefully will not lead to excessive litigation, frustration and prolonged uncertainty.

I believe as most of our citizens do that the House Bill 40 legislation exemplifies government overreach.  Legislation like HB 40 gets passed when lawmakers stand up for the rights of big business and industry instead of balancing with the health, safety and property rights of the individuals that elected them. Industry lobbyists have made clear that the oil and gas companies object to pad site setback limits any further than 600’ or so from homes and schools. Given that much of the drilling today is done horizontally, production is within reach of just about every backyard, hospital and school in Town. If HB 40 passes, I do not believe that we will immediately see pad sites popping up all over town, but we have to prepare for that contingency by staying informed and vigilant. One way that people can protect their neighbors and your Town is not sign a lease. Doing the right thing is sometimes hard, but it should be our first option–not capitulation. Town leadership should uphold the trust that our citizens have placed in them.  If elected to Town Council, I will encourage other Council Members, the Town Manager and Town Attorney to stand firm with our current strong ordinances, while we appeal to Sen. Jane Nelson to stand up for our citizens’ health, safety and property values.

As this is still in committee at the senate, it is hard to know what the final bill will be. Unfortunately, I do think it will make it to the governor’s desk in some form. Without knowing the final language, anything that we say here is purely speculation at this point. This makes it very difficult to make a specific plan of action. What we can do is make sure that we put people in office during this election that know how to work as a healthy team and within our systems. It will be critical for us to be able to move quickly and effectively in this new environment. This is the time for folks with governmental experience, analytical thinking and an ability to work together for all of us on behalf of the town and its citizens.

We are one of the towns that could have their gas and oil drilling ordinance impacted by enactment of HB40. Since the Texas Senate has not passed the same legislation, I see the importance of working with our members of the legislature to help shape a bill that is more respective of our ordinance. I support our community’s right to have our own drilling ordinance. However, we must have all the details before taking action.

For some reason, Austin has decided that we don’t have the intelligence to govern our own gas and oil ordinances. HB 40 has passed in the House and now is moving onto the Senate. There were ten amendments attempted, some of which tried to give some local control back, but the bill was approved without any of these attachments. If this gets approved in the Senate and the Governor signs it, it will set a bad precedent for us losing all of our local control.  It would be irresponsible of me to try and figure out a way to save our current gas and oil ordinances until it is signed; there is no way of predicting any of the amendments that might still be attached. We need to wait until the bill is signed by the Governor and then we can look for valid solutions.

I am against HB40 and the encroachment of the State government over our Town’s rights. HB40 has passed in the State Legislative Lower Chamber but as of the time of my response did not pass the State Upper Chamber. As it didn’t pass the Upper Chamber and wasn’t signed by the Governor, it is difficult to predict if it will be approved by the Upper Chamber and the Governor. I am disappointed that our State representatives, many of which ran their campaigns with the slogans of stopping the Federal Government from encroaching State rights, would support the state government encroaching on local governments. I am absolutely positive that many Towns and Cities will unite to fight this intrusion on our rights and encourage all citizens to voice their opinion to their state representatives on this important matter.

0 0 0 0 0
Previous : Hot and Cold: Thermoperiods
Next : Denton County home values on the rise; What you can do