Denton County needed April’s weather to be wet, and our April showers were all we could’ve hoped for.  Crops, lawns, trees (and weeds) are green and lake levels are coming up to above normal.

Statistically, our average high was 76 degrees. Our average low was 58.  Adding our last weekend’s temperatures in the 80’s, our day-night average was about 67 degrees roughly two degrees warmer than normal.  Rainfall made the biggest difference. As of April 25, Denton Enterprise Airport had recorded 4.66 inches of rain, nearly two-and-a-half inches above normal. And beyond this writer’s deadline, there was another 1-2 inch rainfall potential forecast for April 27-28. If realized, it could mean our first 6-inch monthly rainfall total in recent memory. 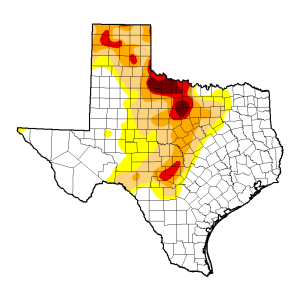 It’s been so long since we’ve had this much water, flood safety is certainly worth a mention. Denton County activated two flash flood warnings on Friday, April 24th; once late morning, and again that evening. With the extensive road work going on along I-35E and other traffic lifelines, low water crossing are very dangerous this time of year, especially at night. Soils are rapidly reaching their moisture capacity, especially the sandy loam soils Denton County is so well known for. If we maintain this above-normal pace in rainfall, much of the subsequent storms will run off, producing more flooded low spots we haven’t thought about in years.

Looking ahead, due to a weak El Nino in the Pacific and a modestly strong signal in the Pacific Decadal Oscillation, the Climate Prediction Center is forecasting slightly cooler than average temperatures for North Texas and normal precipitation levels. Based on that, and persistent trends, it’s reasonable to expect highs in the 80s, lows in the 60s and several bouts of rainy, occasionally stormy weather, adding up to another 5 inches of rainfall during May.

Brad Barton is Chief Meteorologist of WBAP820/570KLIF/99.5 ‘The Wolf.” Brad is also the home-field Meteorologist for the Texas Rangers Baseball Club.

Brad Barton is Chief Meteorologist of WBAP 820/570 KLIF/99.5 “The Wolf” and the Texas Rangers Baseball Club. Read his column on Denton County weather each month in The Cross Timbers Gazette.