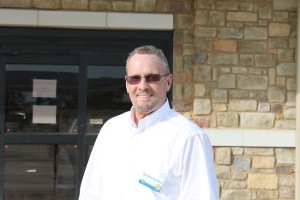 Keith Gaitlin is excited about the May 22 opening of the new Kroger Marketplace at Lantana Town Center in Bartonville off FM 407.

After all, the 33-year veteran Kroger employee is managing the new store, having recently moved from overseeing the Kroger off Teasley Lane.

“It’s a privilege to open a Marketplace,” Gaitlin said. He has worked in management at several locations around Denton County from Flower Mound off FM 2499 to a Kroger on University Drive in Denton. Working in several Denton County locations, Gaitlin has come to know the area well – feeling quite at home at the new store.

Now, he is steadily working to put together his management team for the newest Kroger Marketplace.

“Our goal is to create a highly-satisfied customer service,” Gaitlin said.  At each location, he has worked to get involved in the community, most recently working with the food banks in Denton, serving on the Interfaith Ministries Apple Tree program board and working with the Kiwanis Club on their pancake supper.

It is the same community outreach he plans to do in the communities surrounding the new Kroger Marketplace off FM 407.

Gaitlin, whose wife teaches at Newton Rayzor in Denton, will now be a bit closer to one of his daughters, who teaches at Blanton Elementary in Lantana. In fact, he can spot the school flag from the front of the new Kroger’s main entrance.

The store’s opening will not only include a ribbon cutting but also some free giveaways to the first 250 customers at each of the first five or so days, officials say.

The new Kroger, with 124,000 square feet of space, will offer a smorgasbord of wares, groceries, clothing, jewelry, pharmacy, a fuel stop and much more as part of the company’s newest concept – creating a one-stop-shop place for residents to find everything they might need in one convenient location.

“The fact that it’s that large means there is that much more we can offer,” said Kristal Howard, public relations manager for The Kroger Co.

As the 10th Kroger Marketplace in the Dallas-Fort Worth region, the location will feature a full line of apparel for ages newborn to 99, housewares, Murray’s Cheese Shop with 175 different varieties of cheese, Fred Meyer Jewelers offering everything from gifts to engagement rings, a sushi bar complete with stool chairs to sit and watch it being made to order, expanded beer and wine offerings, a delicatessen and bistro with expanded salad and soup offerings, a Starbucks and, well, the list goes on.

One note about the sushi bar – fresh pho will be available as will fresh rice bowls. Murray’s Cheese Shop, which is based in New York City, will also offer small trial-size baskets of cheese for under $5.

A large floral selection inside Kroger is one of its hallmarks, especially since the company owns FTD Florists, Howard noted.

The new marketplace concept also includes buying locally, seeking out Texas growers to offer the freshest produce. Soon to be in season are green beans and melons, which will be trucked straight from the farm to the produce aisles. “The freshness factor is increased,” she said, adding the store will even have a fresh orange juice bar as well as Texas-produced beer and wine.

Other products are sought from the Texas market and are noted with signs that indicate the items are “From Texas For Texas.”

The Natural Foods grocery section will include a wide assortment of organic products, catering to the growing demand by consumers, Howard said.  In fact, as the new concept matured, officials opted to allocate more space to the organics selection, she added.

“We have seen double digit growth,” Howard said. “You no longer have to go to a separate organics shop.”

Serving the community is part of the Kroger mantra, from helping local PTAs to saving its meat by freezing it at the sell-by dates to lock in freshness and send it to local food banks.

“We’re putting it into the hands of people who need it,” she said.

In addition, through their Kroger Community Awards Program, shoppers can link their cards to preferred non-profits who have enrolled in the program. Monetary donations are then directed to the charity of the customers’ choice based on how much they spend at the store.

Another key part of The Kroger Co. mission is to make sure their footprint is Energy Star Certified. The store in Lantana will be built to attain the certification, which takes a while to receive. Skylights are put in to reduce overhead lighting, concrete floors are used and lights in frozen food sections dim when no one is using them. Kroger also has recycling programs for bags and cardboard.

Kroger is currently hiring to fill more than 300 employees at the store from part-time to fulltime and from clerks to managers. Anyone interested in applying can visit www.jobs.kroger.com for more information.