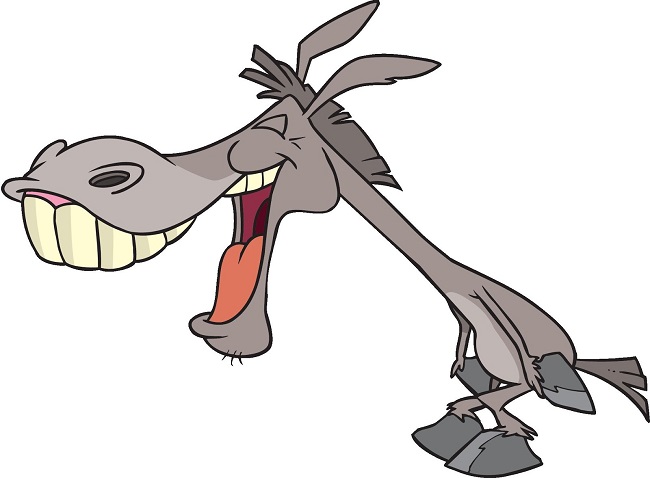 My husband and I walk twenty minutes every day.  That’s unless, of course, it’s raining, too windy or too cold, or too hot.  We are fair weather walkers.  And we realize that twenty minutes a day is a paltry amount but it makes our old bodies feel like we’re actually getting some exercise.  There’s another benefit to our strolls which we especially look forward to and that’s getting to see our friends.  We’ve made so many over the past year … we had no idea our fan base would grow so quickly.

We never even learned the name of our first buddy, nor its sex, for that matter, but he/she quickly became one of my husband’s favorites.  Sequestered behind a rickety wooden fence, the mule? would poke its head over the top while Ken doled out generous pats to its noggin.  Got to the point where Ken would start acting like a jackass (my bad) by doing his finest rendition of a braying mule long before we reached the fenced acreage.  He sounded more like a sick horse than a mule.

I did gently suggest that he try a simple Hee Haw, but then who was I to criticize?  The donkey? would saunter over in our direction while my husband began coaxing the critter by tapping on the wood.  The two of them became fast friends while I maintained my distance out on the road.  I had a clear view of those awfully large teeth from where I stood and so that’s where I drew the line.  (Frankly, I think Ken used this stopover as an excuse to rest from the walking.  I’m certain he enjoyed the camaraderie but just not as much as he’d have you believe.  Just sayin’…)

This went on for months and months and then one day, all of a sudden, our pal was gone.  We missed him/her for weeks and then finally decided he/she had moved on to greener pastures.  Still being curious as to the true identity of our comrade, for your edification and mine, I looked up what my husband was so enamored with and here’s what I found:

Basically, the mule is the offspring of a donkey (called a jack or jackass) and a female horse (mare).  A boy donkey and a girl donkey make a donkey.  A boy horse and a girl horse make a horse.  Things got complicated when a boy horse got a gleam in his eye for the girl donkey next door.  So I’m including this wonderful little chart I found on the net so you can be just as confused as I am.

One day while the equine was enjoying having his nose stroked we were befriended by a little Pug.  As we walked he followed along right beside us and kept up as best he could.  It was funny to watch his little short legs work at such a fast pace … not that our gait was daunting.  He managed to make the entire circuit around the block.  It was a hot morning and by the time we reached our house, both he and we were pooped and panting.  I put some water out on the front porch for him and was able to get under his chin to read his tags.  His name was Pugsy (what else?) and the information also had a phone number of a vet who I called.  He in turn contacted the owner.  I went out on the porch to try to tether Pugsy but by the time I got there the pup had taken off for parts unknown.  His owner was going to send her husband over to fetch the dog but no one ever came to our door so we never found out what happened.  Regardless, we still consider him our “Pal Pugsy.”