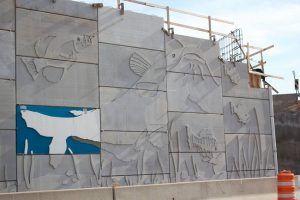 With partial demolition and ongoing construction of the Corinth Parkway bridge over I-35E, attention now turns to FM 407 where construction work to shut down and then demolish the bridge begins in April, according to AGL officials.

FM 407 traffic will be shut down that month to allow crews to begin demolishing the bridge on the western bank. Interstate 35E traffic will continue to flow north and south under the eastern portion of the bridge, officials have said in recent public meetings.

The plan is to begin building the I-35E main bridge on the western side to allow FM 407 traffic to flow underneath once the eastern side is completed.

By late summer into fall, I-35E traffic will be moved to the newly-completed western bridge while crews begin demolishing the eastern portion.

The eastern portion of the new I-35E bridge and demolition of the existing eastern bridge is expected to begin in the fall.

By late this year, temporary paved lanes will allow east-west traffic on FM 407 to resume with one lane in each direction for traffic to flow underneath the first new I-35E bridge, officials said.

The project is expected to be finished by no later than the summer of 2016.

The next bridge slated for reconstruction is expected to be Fox Avenue.

The Lewisville Texan Journal contributed to this report.

Pictured Above: Crews are beginning to finish some of the murals slated for the sides of the new I-35 bridges over FM 407, which are expected to be complete by the summer of 2016.