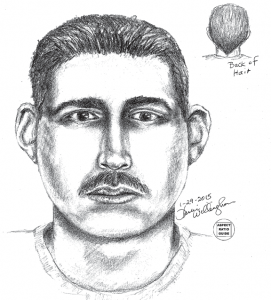 Lewisville police released a sketch of a suspect in an attempted abduction of a teenage girl earlier this week.

The female Lewisville ISD student was offered a ride by a stranger in the 500 block of West Corporate in Lewisville around 4 p.m. Tuesday, police said. When she refused, the suspect left his vehicle and tried to grab her. She was able to escape and run home unharmed, police said.

Deputy Leslie Willingham, a forensic artist with the Denton County Sheriff’s Office, was able to create a composite from additional information obtained in a follow-up interview with the young woman.

The suspect is described by police as a: Hispanic male, with a mustache, thin build, in his 30s driving a dark colored four-door car. He was described as wearing blue jeans and a white T-shirt. The teen-age girl also told police that the suspect’s boots were black with the words, “Heavy Duty,” on the insoles. The suspect also dragged his right foot and had very chapped lips, officials learned. The back of the suspect’s hair was groomed to a point.

The inside of the suspect’s vehicle was described as being light gray with something hanging from the rearview mirror, possibly dogtags.

Anyone who witnessed this offense or has information that would benefit the investigation is encouraged to call the Lewisville Police Department at 972-219-3620 or the TIPS line at 972-219-TIPS (8477).   Anyone with a cell phone may also send an anonymous tip by texting “TipLPD” and their message to 847411.

0 0 0 0 0
Previous : Marshalling resources in service to others
Next : Double Oak Police Calls